LAWRENCE, Kan. (AP) – The nation’s top basketball recruit is headed to Kansas, and expectations at the perennial contender are soaring once again. The Jayhawks are losing all five starters from last year’s team, which won its ninth straight Big 12 title. But the news Tuesday that Andrew Wiggins would be attending Kansas suddenly makes the Jayhawks the team to beat once again. Wiggins joins a recruiting class that was already ranked No. 2 nationally by most recruiting services, and which includes five-star prospects Wayne Selden and Joel Embiid. A 6-foot-7 forward from Huntington Prep in West Virginia, Wiggins has been called the next LeBron James, though coach Bill Self said he reminds him more of Tracy McGrady. Either way, he should be enough to make the Jayhawks title contenders once again. 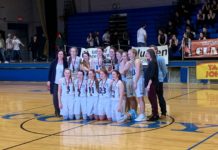