El Dorado, Kan (westernkansasnews.com)-If ever there was a time for an early-season, signature win for the Lady Busters, it’s here.

Tuesday night, Nick Salazar’s bunch takes their act back on the road, into the Power Plant to take on 9-1 Butler. A victory would put Garden City back on the national radar.

“Butler is Butler,” Salazar said. “They’re going to play crazy defense against you and then they do what they do on offense. We’re going to have come out and be able to guard.” 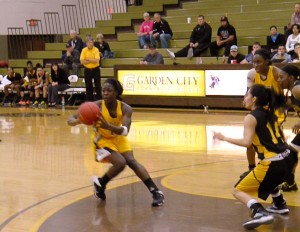 And that’s no easy task. The Lady Grizzlies are averaging nearly 80 points per game and are shooting nearly 50 percent from the floor. And they are loaded.

Sophomore Te-era williams leads the way with her 21 points and 10 rebound per game average. The Division-I transfer from Texas Southern has scored in double figures in all 10 games including a season-high 33 vs. Iowa Western.

Then there’s freshman point guard Teanna Reid, who’s already had Salazar and his staff up nights with her ability to attack the rim and distribute the ball. 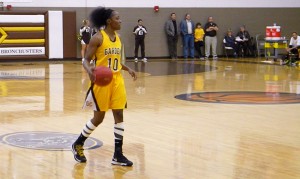 “Their point is the real deal,” Salzar said. “It’s definitely going to be a challenge for us.”

Salazar has a pretty good point guard himself in sophomore transfer Shauqunna Collins, who’s coming off a 16-point, six rebound outing against Otero, CO last week. But the final box score didn’t indicate her struggles in the second half.

In fact, the entire team faltered down the stretch, blowing a 12-point second-half lead on the road. The main culprit: Turnovers. 18 giveaways nullified the Busters best shooting night of the season.

The first-year Head Coach will need solid production from the post, which he’s gotten in spurts through the first eight games. Sandra Davis, who recently signed a letter of intent to play at Houston, is coming off three straight double-figure scoring performances, including a season-best 20 points and 13 rebounds against Tabor College.

Zantaya Davis is playing arguably her best stretch of the young season. But her double-double performance against Bethany’s JV squad was a distant memory as the freshman scored only 4 points in the one-point loss to the Lady Rattlers.

Series Notes: Garden City has won 9 out of the last 16 meetings…teams split season series a year ago

A’s bounce back at El Dorado