Liberal, Kan (westernkansasnews.com)-When a team loses 22 out of their last 23 games in an opponents’ building, you would think they have absolutely no shot. Tell that to Nick Salazar’s Lady Busters.

Zantaya Davis scored 12 points including the go-ahead bucket with two seconds remaining and Garden City ran out of the Green House victorious for only the second time in two decades Wednesday night-knocking off No. 10 Seward County 57-56.

They almost had to play more than that but steady play down the stretch by a young squad, on the road, in a hostile environment, avoided an extra frame; just barely.

After Seward County tied the game at 23 with just under eight minutes to play in the first half, the Busters scored seven straight points to take a 30-23 lead. That didn’t deter the Lady Saints (22-4, 7-3) who closed the deficit to one at the break.

After Garden City (14-10, 6-4) built their lead back to five midway through the second half, Brianna Scott stemmed the tide with a three from the top of the key that pulled the Lady Saints within two 43-41.

Moments later Shanise Brooks’ right-hand layup tied the game at 43 with 11:40 to play. Following Sandra Davis’ go-head bucket seconds later, Korina Chapman banked home a triple from the left wing-putting Seward County in front for the first time in the second half. The teams then played to a stalemate over the final 10 minutes, setting up a wild finish.

Clinging to a two-point lead with under a minute to play, Busters point guard Shaqunna Collins, lofted a rainbow pass that was intercepted by Chapman near the center line. The sophomore whistled a pass ahead to Alana Simon, who laid the ball in and tied the game at 55. On the Busters ensuing possession, Sandra Davis tried to extend her arms out for a wraparound layup, but the ball slipped out of her hands and caromed out of bounds.

On Seward’s next trip down the floor, Davis fouled Chapman on the block-sending the veteran to the free throw line. After swishing the first, the sophomore misfired on the second, and Zantaya Davis grabbed the rebound with 8.2 seconds remaining.

Having to go the length of the floor after the timeout-there was no surprise that Salazar-put the ball in Collins’ hands. The sophomore raced into the front court, drew two defenders and found Zantaya Davis underneath for an easy layup-giving the Busters the lead back with two seconds to go.

The Lady Saints had one last chance to win it following another timeout, but Chapman’s baseball pass was picked off by Collins near half court-rounding out a final 60 seconds that saw desperation morph into jubilation.

Collins and Davis each scored 10 points for Garden City. Brooks led the Lady Saints with 15 points and five rebounds.

Next up: Garden City vs. Cloud County-Saturday, February 15-5:30 p.m. on AM 1030 KBUF and westernkansasnews.com

Notes: Listen to the game in its entirety in our game archives.

Coming off an enormous upset win over No. 12 Hutchinson on Monday night, Busters Head Coach Brady Trenkle stepped off the bus and into the Green House feeling pretty confident. But what transpired over the first 20 minutes left the veteran head coach in utter disbelief.

Niem Stevenson scored a career-high 36 points including 11 of his team’s first 13 and Seward County held off a late Garden City rally to win 69-60 on Wednesday night.

“We had no legs in the first half,” Trenkle said afterwards. “Monday took a lot out of us, and we came out flat.”

The numbers definitely backed that up. The Busters went the first 11:51 without a field goal and by the time the horn sounded for half time, Trenkle stared at a stat sheet with Garden City 2-for-25 from the floor; one of the worst first-half shooting performances in program history.

“I’ve never been involved in a game where my team shot that poorly,” Trenkle said. “We were hitting shots in shootaround; we were focused; we just had no energy.” 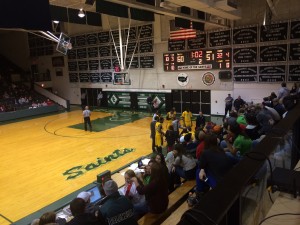 While the Busters couldn’t find the ocean, Stevenson couldn’t miss. The Freshman from Dallas, who was just named the NJCAA player of the week, fought off early foul trouble to drop 25 second-half points on one of the best defensive teams in the country. He also tallied a season-high four 3-pointers including a back breaker after the Busters had cut an 18-point deficit down to eight midway through the second half.

But as crazy as it sounds, and how badly the Busters (19-7, 5-5) shot in the first half, they wouldn’t go away in the final minutes.

All hope seemed to go by the waste side after Seward County (18-6, 8-2) built their lead back to 15 following a Stevenson layup. But D’Shon Taylor wasn’t going that quietly-drilling a three just seconds later to pull Garden City back to within 12 at 58-46 with 1:55 remaining.

Then it became a free-throw shooting contest. After Malcolm Hill-Bey, who dropped 24 on the Busters the first time these two teams met back on January 11, split a pair, Jalen Variste was fouled. He hit 1-of-2, but stole the rebound away from Secean Johnson and laid it in. The bucket, which cut the Saints lead to 59-49 promptly, forced Seward County Coach Bryan Zollinger to call a timeout.

On the Busters ensuing possession, Jeremy Wilson, who finished with two points on just 1-of-9 shooting, missed a layup, which would have cut the lead to eight. Jade Cathy was called for a loose ball foul-sending Hill-Bey back to the line.

Once again the sophomore split a pair, and Taylor grabbed the defensive board. He found Variste, who wiggled around a Wilson pick all the way to the rim for an uncontested layup- pulling the Busters within nine 60-51 with 1:02 on the clock.

Things got more interesting when (Secean) Johnson missed the front end of a 1-and-1 and June Johnson banked in a three from the left wing-making it a six-point game with 56 seconds. That’s the closest the Busters would get.

After that, Garden City couldn’t catch a break. Two free throws by (Secean) Johnson made it an eight-point advantage. Wilson then had a chance to pull the Busters within five, but his straight-on three pin balled out and Stevenson grabbed the loose ball. The freshman made both free throws to extend it to a 10-point advantage.

But the craziest play of the game would prove to be the final dagger. Down 10 with under 40 seconds to play, Variste was fouled. After hitting the first, he misfired on the second-only to see Taylor tip the rebound to Johnson, who’s layup popped out. But the officials missed the fact that one of the Saints’ players had their hand in the net while the ball was going through. It would have cut it to seven.

“I’m so proud of my guys,” Trenkle said. “To fight back the way we did is unbelievable. I didn’t yell at them at the half; I told them you didn’t mean to miss those shots. So let’s change some things in the second half.”

Indeed they did. After that horrid shooting start, the Busters were 11-of-35 in the second half (31 percent); much better than the eight percent in the first 20 minutes.

(June) Johnson led the Busters with 13 points; Taylor chipped in 12.

Besides Stevenson, the rest of the Saints combined for 33 points on just 10-of-29 from the field.

Next up: Garden City vs. Cloud County-Saturday, February 13-7:30 p.m. on AM 1030 KBUF and westernkansasnews.com

Notes: Listen to the game in its entirety in our game archives.