Garden City, KS (westernkansasnews.com)-What happened Wednesday night should not have caught the Busters by surprise; the cardiac kids have seen it all before. So when the game got tight, Brady Trenkle’s team didn’t fold.

“We’ve seen all of this time and time again,” he said afterwards. “Every game has been close. Even going back to the two games against my brother’s teams (No. 2 Hill College and Northeastern); they’ve all been right there for us.”

And so the narrative of losing close games, which to this point, has defined an up-and-down season, might have finally been altered for good.

Davon Anderson scored 13 points including a key bucket in the final two minutes right as the shot clock expired, and the Busters finished off Pratt 75-67 at the Perryman Athletic Complex.

“That was a hard battle; they’re (Pratt’s) a good team,” Trenkle said. “But our goal is to win four in a row and finish 8-8. If we do that, we have a good chance of hosting a tournament game.”

And the second-year coach knew that Pratt (16-10, 7-5) was a different animal. The Beavers came in as the top-shooting team in the Jayhawk Conferenc. By night’s end, Garden City’s defense provided a type of statistical deviation that no other team in the conference has been able to figure out. 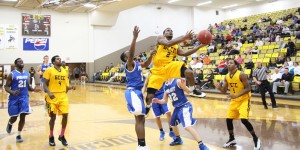 “To hold them to what we did shooting wise was impressive,” Trenkle said. “They’re lights out, and we held them down.”

Pratt entered Wednesday’s showdown having shot 50 percent or better from the field in 16 games, including four straight. In stepped the defensive-minded Trenkle, whose team forced 10 first-half turnovers and held the Beavers to just 37 percent shooting on 10-of-27. In doing so, Garden City (16-11, 5-8) built their lead to as many as 10 in the opening frame. That’s when Pratt flipped the switch, changing the momentum that so many other teams have ridden all the way to the finish line. That wasn’t the case on this night.

The Beavers closed the first half on an 11-4 spurt, cutting the deficit to three at the break 34-31. They even pulled as close as two points in the final 10 minutes, but Garden City countered every right cross with a combination of their own-finishing off the devastating sharp shooters.

“This is a big win for us,” Trenkle said. “But I’m glad that when I walked into the locker room, my guys weren’t excited. They know there’s so much more we have to do.”

Tyrell Springer scored 12 points and recorded his 100th steal of the season. Trenkle even got a blast from the past: John Bell scored 11 points, just his fourth double-figure scoring game in conference play and first since netting 10 in Garden City’s upset win over Butler on January 31. His returning running-mate Tidell Pierre scored seven and pulled down eight rebounds. 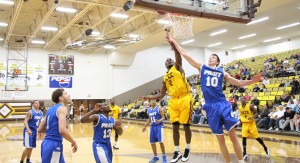 Garden City, KS (westernkansasnews.com)-All anybody will ever remember from Super Bowl XLIX is Malcom Butler’s game-saving interception of Russell Wilson at the goal line. It was one play, a magical moment that stood in time that erased Jermaine Kearse’s sensational catch on the seat of his pants that was supposed to setup the game-winning touchdown and a Seahawks coronation. Instead, Tom Brady and Bill Belichick were raising the Vince Lombardi trophy for a fourth time together.

Though not on the same stage, Wednesday night’ s finish to regulation appeared to be just the moment that Buster Coach Nick Salazar had been searching for all season; a brown and gold magical night.

“Once that happened, I told my team we’re going to win this game,” he said. 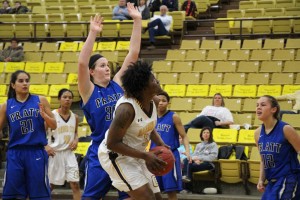 Trailing 56-53 with 2.9 seconds to play, Bianca Cage was at the line. The Eastern-Michigan transfer calmly swished the first; then intentionally missed the second. The ball caromed off the front rim just right, bouncing right back to Cage. The sophomore immediately turned and fired a desperation prayer. As the ball hung in the air for what seemed like an eternity, Salazar watched from the bench with his eyes wide open.

“It’s been a tough year,” Salazar said. “This team is learning a lot about who they are.”

To his surprise, Cage’s shot splashed through the net, inexplicably sending the game to overtime tied at 56. But the memory, just like Kearse’s catch or Tony Parker’s massive 3-pointer in game six of the 2013 NBA Finals was replaced with utter disappointment. In Parker’s case it was Ray Allen hitting a game-tying triple to knot the score (Miami went on to win in overtime and took the series in seven games). In Salazar’s case, it was Pratt outscoring Garden City 9-2 in the extra session, sweeping the season series from the Busters 65-58.

“For all I thought would happen, it never actually materialized that way,” Salazar said. “The magic didn’t live on, and we lost the game.”

But the fact that Garden City (13-14, 4-9) was even in that position, led you to believe that the Busters would somehow pull it out. Salazar’s bunch built the lead to eight 37-29 with 17:15 remaining in the second half. But turnovers, 27 for the game, including 17 in the final period alone, let Pratt (14-12, 4-8) right back into it. The Beavers stole the momentum and the lead, using a 25-19 spurt to take a 54-48 advantage with 2:30 to play. That’s when the inexplicable morphed into something plausible.

First it was Cage drilling a 30-foot triple from the wing. Then it was Cage’s steal and uncontested layup cutting the Beavers’ lead to a single point. After Lanina Spence, who took six charges, recorded two steals and finished with a career-high 24 points, buried two free throws, Cage capped off the wild final 150 seconds of regulation with her game-tying bucket at the buzzer. The sophomore outscored Pratt 8-2 by herself during that stretch. 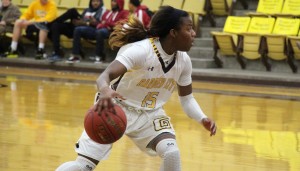 But the overtime proved to be more about delaying the inevitable than divine intervention. And nothing signified that more than Spence’s third-chance, put-back layup following her missed tap in and Teairra Luckett’s blown bunny. Meantime the only offense Garden City could muster in the extra five minutes was two free throws by Tashawyna Edwards with 30 seconds remaining.