El Dorado, KS (westernkansasnews.com)-It wasn’t supposed to happen; at least not on Saturday; not this year; maybe not even next season.

So much for conventional logic; better yet-so much for expert analysis.

The Broncbusters played inspired defense, forcing two turnovers and holding off a furious Grizzlies rally in the final seconds as Garden City stunned No. 1 Butler 25-20 at BG Veterans Sports Complex.

“This win is all about the players,” Sims said afterwards. “These guys worked their tails off. It all came together.”

And to think, most thought Butler (8-1, 5-1) would hand the Broncbusters a crushing blow; instead the only blow dealt was the one to the Grizzlies national title hopes.

“We knew they were going to hit us in the mouth,” said linebacker Myles Matthews, who finished with a team-high 13 tackles and two sacks. “We realized though that when you get hit in the mouth, you have to punch back and keep fighting. And we did.”

Boy did they ever. But just one amendment to Matthews statement: Garden City (2-7, 2-5) was the one that came out throwing the punches.

Jeff Thomas’s 40-yard return on the opening kickoff set the Broncbusters up at the Grizzlies’ 44. After picking up a first down, it appeared the drive would fizzle out at the Butler 23. But Sims rolled the dice and kept his offense on the field on fourth-and-7.  The risk payed off when quarterback Todd Porter connected with Thomas for 22 yards down to the 1-yard line. Then Sims unleased his new toy.

Sitting in his office on Wednesday night, the veteran coach exhibited a quiet confidence.

“We’re going to run Jeremy Faulk all night,” Sims explained with a smile. “Our defense couldn’t stop him all week.”

And for the most part, neither could Butler’s.

On first-and-goal, Garden City lined up in the “power I.” The Grizzlies front seven never had a chance. Faulk took the handoff from Porter and bulldozed into the end zone off right guard. Kevin Oleny’s extra point was good, and the Broncbusters had a 7-0 lead three minutes into the game.

“I can’t even put into words how good our offensive line was,” Sims said.

One can only imagine what they could have done with two.

With a seven-point cushion, Brian Michaelowski unleashed his defense, and on Butler’s first play from scrimmage, Julian Burris fumbled after making a short reception, and Josh Meis recovered for Garden City at midfield.

“We’ve always known how good our defense was,” Sims said. “It was a matter of getting these guys to buy in and believe.” 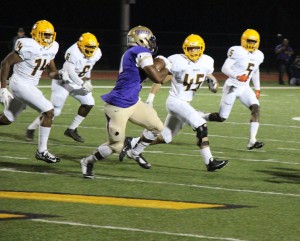 While their defense held the Grizzlies in check, the Broncbusters’ offense was busy extending the lead. Porter, who was making his first start at quarterback, directed Garden City on a nine-play, 67-yard drive early in the second quarter. Three times during the march, the brown and gold converted on third down. First it was Faulk rumbling 33 yards down the left sideline on fourth-and-1 from their own 42. Then Porter hit Thomas for 17 on a third-and-6 from the Butler 21.

“The biggest thing was just to maintain my composure,” Porter said. “We just took it one play at a time.”

Three plays later on third-and-goal from the 9, the sophomore threw his best pass of the night: a back-shoulder fade into the left corner of the end zone that Thomas reeled in for a touchdown.

“Because of Coach Sims, I’ve got a lot of things in order,” Thomas said. Once I got my academics straightened out, I started to play better. It was a correlation. Without my academics, football means nothing.”

Those failing grades had Thomas riding the bench in Garden City’s week-five loss at Independence. On Saturday, his renewed dedication had given the Broncbusters a 13-0 edge (Olney’s extra point was blocked by Desean Washington) with 7:50 to play in the half.

Butler finally woke up on their next possession, driving 50 yards to the Garden City 10. But Matthews derailed any Grizzly touchdown hopes when he sacked Hansen for a five-yard loss on third-and-goal. Instead it was Lane Brewer connecting on a 27-yard field goal to put Butler on the board with 3:03 remaining until the break.

“We made big plays in the red zone,” Sims said. “But we’ve had that ability all season. The guys just finally trusted the process tonight.”

After Garden City went three-and-out on their next possession, the Grizzlies had a chance to pull within three before the half. And the plan was setup perfectly after a 23-yard punt by Justice Wimes gave Butler the ball at the Garden City 49. Then a pass interference penalty on Trayvone Blake moved the Grizzlies into scoring range at the 21. But three plays later, Hansen inexplicably lobbed a pop-fly pass into the end zone that was easily intercepted by Lonnie Johnson. The head scratcher: his closest target Burris was 10 yards away from the play.

“We never let the scoreboard define us,” Faulk said. “Each game is a new day. That’s how we approached this one.”

Yet Faulk, and the rest of the defense knew that eventually Butler would fight back.

“We just had to read our keys; no matter what was happening,” Faulk added. “We had to maintain our focus.”

Butler made that extremely difficult early in the third, scoring the first 10 points of the second half. Kobe McCrary’s explosive seven-yard touchdown run capped off five-play 64-yard drive. Then, after Tony Jones recovered a Porter fumble at the Broncbuster 19, Brewer drilled a 32-yard field goal to tie the game at 13 with 9:54 to go in the quarter.

Locked in an all-out-war with the top-ranked Grizzlies, Garden City needed an answer.

“We didn’t want to try and do too much,” Porter said. “We just wanted to keep going and maintain the clock.”

Porter’s calm demeanor was exactly what the Broncbusters had been looking for.

On their ensuing drive, Porter put Garden City on his back, connecting on all four of his passes for 30 yards. His final completion went to Felton Hatcher for 16 yards down to the Butler 14. On the very next play, it was Porter calling his own number; sprinting around right end and willing his way across the goal line-giving Garden City a 19-13 lead with 6:30 remaining in the third.

Not even an interception on the two-point conversion could damper an ecstatic visitor’s sideline.

“I know how to beat Butler,” Sims said two weeks ago following a blowout loss to Hutch. “We’re just not in a position to do so right now.” 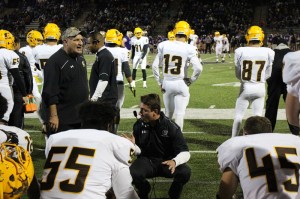 14 days later, Sims’ team grew up right in front of his eyes. And after Porter hit Gabe Luyanda on a seven-yard touchdown pass, Garden City had a 25-13 advantage early in the fourth quarter.

“These guys are beginning to believe,” Sims said. “We have talent. Our problem is depth. We don’t have a lot of guys behind our starters.”

But if anyone thought Butler was going to fold the tent, they were sadly mistaken.

Hansen settled himself after the Garden City score, driving his team 58-yards in just under three minutes. The capper: a 36-yard touchdown pass to McKinley Johnson, who shook Andrew Brown out of his shoes en route to the end zone. Brewer’s extra point made it a five-point game with 11:03 to play.

The Grizzlies had three chances to take the lead in the final 11 minutes, and each time Garden City’s defense stood tall. Faulk’s sack on fourth-and-18 ended one drive. Then the Broncbusters forced a three-and-out with less than three minutes remaining on another. But after Garden City punted with 2:03 to play, it set the stage for one of the best finishes of the season.

Starting from their own 2 with no timeouts, the Grizzlies went to work. They also got some help when Garden City jumped offsides on a fourth-and 1 at the 11. Then on third-and-8 at their own 39, Hansen found Burris for a 24-yard gain to the Broncbuster 37. After racing back to the line of scrimmage, Hansen hit Burris again for 17 yards.

After pushing the ball inside the Broncbuster 10, the Grizzlies were facing a third-and-goal with time winding down. As Hansen dropped back to pass, Delshawn Phillips blindsided him, sacking the quarterback and the Grizzlies undefeated season.

“All of us made plays,” Matthews said. “At the end of the game, when we needed it, Delshawn made a nice play. Coach just kept telling us next play. That’s how we responded.”

Six of the Broncbusters 11 sacks came in the second half, including three on Butler’s final two drives.

Porter finished the night 20-of-29, for 246 yards and two touchdowns. He also ran it 28 times for 28 yards and a score. Faulk carried the ball 12 times for 33 and a touchdown, and Lawyer Davis had four catches for 65 yards, including a 46-yard reception that setup a Broncbuster score in the second half. 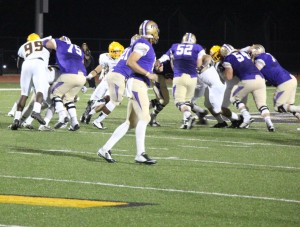 Hansen completed just 18-of-40 passes for 185 yards with a touchdown and a pick. McCrary carried the ball 29 times for 176 yards and a touchdown. (McKinley) Johnson reeled in six balls for 67 yards and a score.

Notes: The win snapped a 20-game losing streak to Butler (first victory since 2001: a 14-7 win in Garden City)…It’s the Broncbusters first victory in El Dorado since 1999 (Beat the Grizzlies 44-38 in overtime)…Garden City won despite Butler running 20 more plays (92-72)…It was the first time this season that a Broncbuster quarterback did not throw an interception…Garden City held Butler to its third lowest rushing total of the season (161 yards)…Garden City cracked 300 total yards (301) for the first time since September 17 vs. Air Force Prep…Jeff Sims’ teams have now won three out of their last four games against Butler (Ft Scott beat them twice in 2009)