Garden City, KS (westernkansasnews.com)-Garden City’s quest for their first regional title in nearly 13 years hinges on winning every game from here on out.

And despite putting the crowd at the Perryman Athletic Complex on edge for a majority of the night, that goal remains intact for Nick Salazar’s team.

“I was very concerned about this game,” Salazar explained. “We just came off a very emotional game at Hutch, so it was almost a crap shoot to see how our team responded.”

And it seemed like a daunting task once Dominique Baker scored five straight points to put Barton County in front 58-56 with 1:30 to play. When the Cougars got the ball back, they had a chance to make it a two-possession game, but Regan Unruh missed a chip shot from the block and then was called for a loose-ball foul.

Dominique Maxwell hit the first free throw and missed the second before DeRae Lewis grabbed the offensive rebound. Eventually Dobbins was fouled, splitting a pair from the stripe to tie the game at 58.

“I thought we handled the adversity very well,” Salazar said. “It was one of those games where we didn’t play our best and still found a way to win.”

Then the defense came up with a big play, intercepting Kilee Harris’s pass in the lane with 20 seconds. 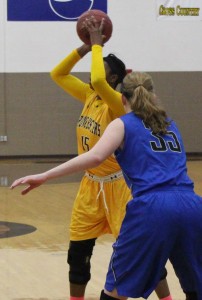 Salazar deferred using a timeout; instead calling for Dobbins on an isolation. The freshman took Alexus Bryson off the dribble, changed directions before hitting on off-balance fadaway to put the Broncbusters on top 60-58.

“Shala can pretty much get whatever shot she wants, and she proved that again tonight,” Salazar said.

Dobbins scored 11 points in the second half, and finished 12-of-13 from the line. It’s the 23rd time this season she’s shot 10 or more free throws in a game.

“We have a week off now, and it couldn’t come at a better time,” Salazar explained.

In the early stages, it looked like Garden City would run away from the Cougars. Jenna Classen buried three first-quarter treys, Akula followed with a deep ball, and the Broncbusters had a 20-7 lead. They stretched that to 14 early in the second.

But inexplicably the Broncbusters went cold. Baker followed with six straight points, spearheading a 9-0 Barton County run to pull to within five. They pulled to within two late in the final minute of the first half with Megan Jirak at the line with a chance to tie. The freshman hit only one, before Donasja Scott’s jumper gave Garden City a 29-26 edge at the half.

Garden City was just 6-of-20 shooting in the second quarter.

The Cougars run continued in the second half, tying the game twice before taking their first lead on Harris’s 3-pointer with 7:18 to play in the fourth. Baker’s and-1 layup tied it again with 3:21 before hitting a go-ahead runner with 1:30 to play.

“We survived; at the end of the day that’s all that counts,” Salazar said. “There are a lot of things we can learn from this game.”

Harris finished with 18 for Barton County, who has now lost seven of the last nine meetings to Garden City. Baker tallied 16, and Jalisa Jones had 13 points. Jirak grabbed a team-best nine rebounds.

Akula splashed home 12 for the Broncbusters, who have won nine out of their last 10 games. She was 4-of-7 from beyond the arc.

Garden City, KS (westernkansasnews.com)-Garden City Coach Brady Trenkle has pointed out that something has been missing on his team for quite some time now.

On Wednesday night, it was fairly evident.

Dequandre Dentmond scored 17 points, including the game-winning tip-in at the buzzer as Barton County erased a nine-point deficit to stun the Broncbusters 79-77 Wednesday night at the Perryman Athletic Complex. 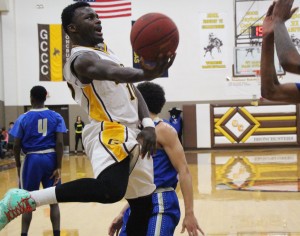 “Dentmond is one of the most athletic guys in our league,” Trenkle said. “That’s what we’re missing: a 6’8 kid who is active around the rim.”

But it was hard to imagine the game ever coming down to that once the Broncbusters turned an early 12-point deficit into a nine-point lead with 6:56 to go. But Barton County (17-8, 9-5) fought back to tie the game at 73 on Dentmond’s two free throws with 2:37 remaining.

J.T. Bennett and Josh Fleming sank charity shots to give Garden City the lead back 77-75, but Hays-product Jordan Windholz buried a long two from the corner to tie it.

Instead of running the clock down, Bennett fired up a 3-pointer with 26 seconds to play. It clanked off the front iron, and Dentmond grabbed the rebound.

“I didn’t call timeout because these guys know what they’re supposed to run,” Trenkle explained. “But they didn’t run the right play, and instead we jacked a 3-pointer with too much time left. Of course it’s all great if it goes in, but that’s not what we called.”

The end result was demoralizing.

Instead of calling a timeout, Barton County Coach Craig Fletchall put the ball in Derek Dorn’s hands. The transfer from Seward County ran the clock down to six seconds before making his move against James McNeal. The sophomore went left before jacking a runner in the lane that hit the back rim. But Dentmond stuck his right arm up and softly tipped the ball through the net right as the buzzer sounded. 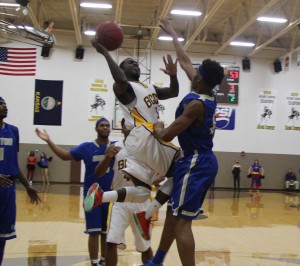 It was only fitting that Dentmond took down Garden City after his 17 point, 10-rebound performance back on January 13 propelled the Cougars to one of their most impressive victories of the season.

“It’s hard for my guys,” Trenkle said. “They deserved to win this game as much as Barton County. They fought, and they played hard. But at the the end of the day, they made the play at the end. We’ve won plenty of games like that over the years. We were just on the wrong end tonight.”

In their first meeting, Barton County scored the first eight points and raced out to a 19-point first-half lead. On Wednesday, the Cougars build a 12-point cushion thanks to Gage Loy’s technical foul with less than two minutes to play in the opening period. Ezekiel Charles hit the two freebies, and the Cougars had a 44-32 lead.

Garden City responded by scoring the final five points of the half and trailed by seven at the intermission.

Aaron Ray’s three-point play pushed the lead to eight with 8:12 to go. Garden City did not hit a shot from the field the rest of the way.

Dorn sparked the comeback, scoring eight of his team’s final 15 points as the Cougars closed the contest on a 15-4 run.

Josh Fleming paced the Broncbusters with 23 points but was just 7-of-23 from the field. Beard chipped in 15, the most he has scored in conference play. (Aaron) Ray and (Diontae) Jones each tallied 10 points apiece. 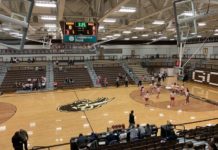 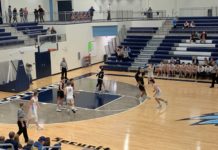