Garden City, KS (westernkansasnews.com)-Garden City Head Coach Jeff Sims has always said that he would take an ugly win over a loss any day of the week.

So when asked that question following his team’s second victory of the season, the second-year head man stuck to the script.

“It wasn’t pretty, but we got it done,” he said. “Last year, we would have lost this game.”

“We have to get better on offense,” Sims said. “Our running game is there, but it’s no secret that our passing game must improve.”

But that defense is putting the rest of the conference on notice. 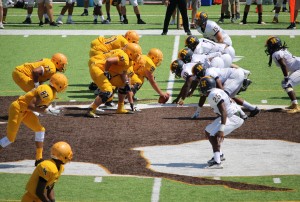 Trailing 13-7 midway through the final period, Highland (1-1, 1-1) made two trips inside the red zone. In fact, during their first march deep into Garden City territory, the Scotties reached the 1-yard line. But a false start, coupled by Andrew Plank’s tackle of Marquis Terry for no gain and backup quarterback Tristan Speer’s incomplete pass in the end zone on fourth down ended the threat.

After the Broncbusers went 3-and-out, Highland got the ball back at the Garden City (2-0, 1-0) 40-yard line. It took the Scotties eight plays to reach the Broncbusters’ 11. It was now fourth-and-2 and reigning National Defensive Player of the Year Jeremy Faulk was gassed.

“I called a timeout and told him that you know if we stop them here the game is over,” Sims said. “He looked at me and smiled.”

That subtle gesture said it all.

Faulk muscled up whatever strength he had left, fought off his block and ripped down Terry for no gain.

During the first 30 minutes, Terry rushed the ball six times for 10 yards. Over the final two quarters, Terry totaled 76 yards on 15 carries. But in the end, the holes finally closed up, thanks in large part to arguably the best defensive player in junior college football.

“He (Faulk) is so hard to stop,” Sims said. “But collectively, as a defense, we are pretty good. “I watched the Highland-Dodge film from last week, and I think Dodge City has two of the best linebackers I have ever seen at this level. But our defense as a whole is very good.” 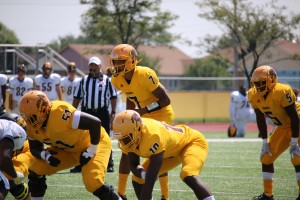 Sims was not overstating it; this was no overreaction. The truth of the matter was this: the Broncbusters held the Scotties, the same team that knocked off No. 8 Dodge City seven days earlier, to just two first downs and 45 total yards in the first half. That same unit sent Highland quarterback and conference player of the week Kahlil Render heading for the showers early while also shutting down wide receiver, and Clemson transfer Demarre Kitt (five receptions for 29 yards).

“I tell our guys that we need to go 1-0 every week,” Sims explained. “I don’t care about the next game until we get there. And that’s not coach speak. That’s how we prepare. We just beat a very talented football team.”

Sims game plan wasn’t something that was stolen from the Smithsonian; it wasn’t plucked from Nick Saban’s playbook. It was as simple as this: run the football; speed up the game and play championship defense. And for the first 15 minutes of the contest, all three were in full effect.

The Broncbusters marched nine plays on their opening drive, covering 45 yards in 3:56. They threw the ball only twice for 21 yards. The rest was done on the ground.

Tra Minter ran it seven times for 23 yards including a three-yard dash to pay dirt to give Garden City a 7-0 edge with 7:01 to go in the first. 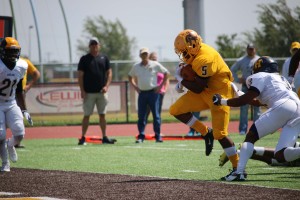 Then, after the defense forced a 3-and-out, the Broncbusters were the beneficiary of Trenton York’s one-yard punt into a 30 mph stiff, southerly wind.

On the very next play, Minter ripped off a 27-yard run down to the 4. Two plays after that, Jayru Campbell broke two tackles sweeping to his left before diving across the goal line for a 13-0 lead (Luke Herring’s extra point by was blocked by Jim Philistin).

“We did the things that we needed to do offensively in the first quarter,” Sims said. “After that, we got away from what we do.”

Garden City threatened again early in the second, reaching the Highland 20-yard line. But with a fierce wind, Sims kept his offense on the field only to watch Minter get stonewalled by Isaiah Gray for a one-yard loss on fourth down.

Following a Highland punt, the Broncbusters moved 52 yards in 11 plays to the Scotties’ 5. But Dual Watson dropped Campbell for a one-yard loss on the ensuing snap; Tyler Sims tackled Charles West behind the line before back-to-back penalties put the ball back at the 16. Going into the wind, Sims again kept the offense on the field on fourth down. This time, Campbell’s touch pass to the back left corner of the end zone for Jeremiah Jackson was broken up by Antonio Cole.

“We kept playing,” Jennings said. “We kept getting after it even though we weren’t scoring.”

As much as the offense struggled, the defense was lights out.

Early in the second, Ellsworth transfer Rashaun Croney made a juggling interception of Render at the Broncbusters’ 40.

In the third quarter, Kahewai Kaaiawaawa recovered two fumbles–one when Render was stripped on Highland’s second possession of the half; the other when Speer put the ball on the turf.

But Garden City never took advantage of either gift.

Highland made things interesting when Steven Dealine blocked Justice Wimes punt early in the third and returned it to the 1. On the next play, Terry plunged into the end zone to cut the Broncbusters’ lead to 13-7. 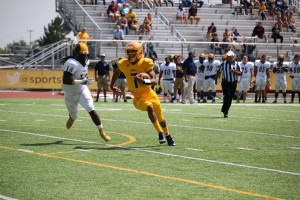 “I’m really disappointed how we played in the second half,” Sims said. “But I’m proud of how we responded when we had to.”

Later in the quarter, Garden City was threating at the Highland 6. But Campbell forced a pass into double coverage that Dominique Williams intercepted and returned to midfield.

“Sometimes Jayru tries to do too much,” Sims explained. “I just need him to stay within the offense.”

Garden City had a chance to stretch the lead again in the fourth, but Herring’s 28-yard field goal into the wind sailed wide left.

That setup two dramatic drives that ended in no points for Highland.

Minter hit the 100-yd rushing mark for the second straight week-39 carries for 141 yards and a score. Campbell was 9-of-13 throwing the ball for 84 yards and one pick.  Daniel Davis caught six balls for 54 yards while Gabe Luyanda led the charge on defense with 10 tackles, a quarterback hurry and a pass breakup.

Render, who totaled four scores vs. Dodge City in week one, was mostly ineffective, finishing 5-of-16 for 25 yards and an interception before being pulled in the second half. Terry toted the ball 21 times for 86 yards and a touchdown and Ronnie Jamison had just two catches on 11 targets.

Notes: Jeff Sims improved to 4-4 in his career in second games…Garden City now leads the all-time series with Highland 28-5…Garden City ran 70 plays to Highland’s 55 and held the ball for nearly 38 minutes…In two games, the Broncbusters have forced eight turnovers (they are plus-7) and have given up a grand total of 255 yards…Linebacker Alex Figueroa was ejected from the game in the third quarter for reportedly saying something inappropriate…In two games, the Broncbusters have thrown the ball just 22 times compared to 112 rushes…Garden City was 5-of-15 on third downs; Highland was 3-of-13…Garden City held Highland to just 64 total yards through three quarters (they gave up 83 in the fourth)

Lady Conquistadors do it again