Council Bluffs, IA (westernkansasnews.com)-Over the past six years, Iowa Western has produced one of the best home-field advantages in the country. In fact, going into Saturday afternoon’s showdown with Garden City, the Reivers had lost just once at Titan Stadium since 2010.

For some reason though, Jeff Sims and his Broncbusters have a history of breaking trends; shattering them even.

Peyton Huslig threw for 87 yards and a touchdown, Josh Hager’s defense scored twice, and No. 2 Garden City became just the second team to beat Iowa Western in their home stadium in six years 27-17.

“I want to let everyone know that was a good football team that we beat,” Sims said afterwards. “This was one of the most hard-fought wins of the season.”

Iowa Western’s 11th-ranked defense had Garden City on edge the entire first half. Linebacker Shaq Jones intercepted backup quarterback Dwayne Lawson’s red zone pass in the second quarter while the Reivers limited the brown and gold to just 42 total yards and two first downs in the first half.

“We just seemed a step behind in the first half,” Sims explained. “Everything we did, we were just a bit off.” 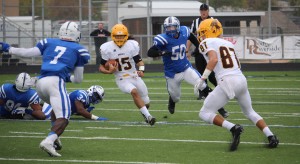 Meantime, Iowa Western’s (3-4) lone points in the first half came on one of the longest drives of the game.

The Reivers converted a third-and-10 at the Broncbuster 45 when Andre Nunez connected with Austin Ahrendt for 12 yards. But the 15-play drive that covered 69 yards finally stalled at the Garden City 22 when Lor’renzo Pratt was stonewalled by Rayshawn Wilborn and Jeremy Faulk. Instead, Iowa Western settled for Bobby Patterson’s 38-yard field goal that produced the only score over the first 30 minutes.

“It was a little frustrating for our offense because we had opportunities,” freshman wide receiver Harley Hazlett said. “But we never panicked; we just stuck to the game plan.”

But the play that got Garden City (7-0, 5-0) on track didn’t come on offense or defense. It was by a guy that’s bought into everything Sims has sold to his players since arriving on campus in December, 2014.

Malcom Howard’s terrorizing hit on Tobias Moss after a punt early in the third quarter sent shockwaves throughout Titan Stadium.

“Malcom absolutely stroked that dude,” Sims said. “That changed the game. It got our guys fired up.”

Howard’s tackle served as a sort of smelling salt for an offense that finally got going on their second possession of the third quarter.

“Malcom is a Garden City kid,” Sims explained. “He’s a three-year guy who is as good a human being as there is. He got us going.” 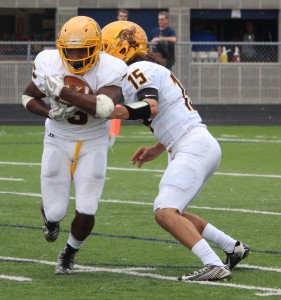 On second-and-4 from midfield, Huslig found Phillips for 18. After a 15-yard personal-foul penalty against the Reivers, Huslig went back to Phillips, this time for a 17-yard touchdown on a perfect, back-shoulder throw in the back-left corner of the end zone for a 7-3 lead.

“Peyton knows how to anticipate the play,” Hazlett said. “He knows where he is going with the football.

And on a day where the Broncbusters had to take whatever the Reivers gave them, Huslig still completed 6-of-8 passes for 87 yds and a touchdown.

Then it was the Broncbuster defense’s turn to make a play.

The next time Iowa Western touched the ball, Gabe Luyanda intercepted Nebraska-transfer A.J. Bush’s pass at the Reivers 20-yard line. After dancing towards the numbers, Luyanda shook free, weaved back to his left and stampeded across the goal line. His pick-six was the Broncbusters second touchdown in less than a minute, and gave Garden City a 14-3 edge with 6:22 remaining in the third.

“That was an incredible play by Gabe,” Sims said. “Not only does he make the interception, but he had to break tackles and a whole bunch of other things to get into the end zone.”

As expected, Iowa Western did not go away.

On the first play of the final period, Nunez escaped a sack on first-and-10 from the Broncbuster 29, stepped up in the pocket, and delivered a rainbow that D’Anfernee McGriff snagged out of the sky to cut the Garden City lead to 14-10.

“Just some miscommunication,” Sims said of McGriff being wide open.

On their next possession, Tra Minter, who was held in check for the most of the day, found daylight for 14 yards to the Garden City 39. Two plays later, Huslig lobbed a wobbly spiral deep down the right sideline. Hazlett stopped on a dime, turned his body around and snagged the ball away from Moss for a 33-yard gain and a first down at the Reivers’ 8.

“I just located the football,” Hazlett said. “It was me vs. the defensive back, and I wasn’t losing. Peyton gave me a chance to make a play.”

Hazlett’s catch put Garden City into scoring position before Minter finished off the drive with an 8-yard sweep into the end zone where he squeezed through a small hole at the 2 before reaching pay dirt. Luke Herring though missed the extra point, and the Broncbuster lead was 20-10 with 12:53 left. 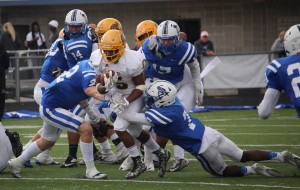 “Once we start rolling, we are pretty hard to stop,” Sims said. “It just took us a little longer to get rolling.”

Rashaun Croney’s 20-yard interception return for a touchdown on an errant pass by Bush put the finishing touches on another masterpiece by one of the nation’s top defensive units.

Not even a late, 49-yard touchdown pass from Nunez to Goulbourne could dampen the mood on the Garden City sideline.

“The Coffeyville game proved how much work this team has put it in,” Sims said. “This game proved that they’re still working.”

Huslig carried the ball nine times for 58 yards for Garden City, who improved to 7-0 for the first time since 2000. Phillips caught four balls for 45 yards.

Nunez was 16-of-29 for 175 yards and a touchdown but was sacked four times. Pratt rushed for 61 yards, and Goulbourne caught a game-high six passes for 105 yards.

Social media will be focus of All-Star week