36 months later, the senior has blazed his own trail into the record books.

It was the 500th win in program history, and the third time this season Garden City surpassed 40 points.

“I’m really happy for Jesse,” Head Coach Brian Hill said. “He deserves it. He’s come a long way. And that’s a great accomplishment for him. This was definitely a record-breaking night.”

On Nunez’s first dash to pay dirt, he was helped out thanks to a short field following a 13-yard punt by Cesar Burciaga. Three plays later, Nunez creased his way to the end zone. Zeke Herrera ran in the two-point conversion, and the Buffaloes had an 8-0 lead.

“In the first half, we played really well,” Hill said. “All phases were clicking.”

After a Liberal three-and-out, Garden City (5-0, 2-0) got the ball back at the Redskins 47. After picking up a first down, the Buffaloes were penalized for holding, and were staring at a third-and-20. This time, the senior showed off his arm, floating a perfect spiral down the right sideline to Andrew Kreutzer for a 45-yard touchdown. Herrera then hit Ryan Jarmer on the two-point conversion, and Garden City extended the lead to 16-0.

The scary part for Liberal was that Nunez was just getting started. 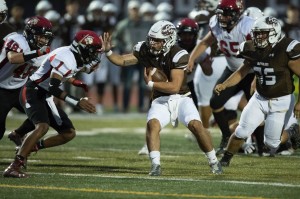 The Buffaloes scored the first four times they touched the ball: Nunez punched it in from six yards out, finishing off a four-play, 43-yard drive that made it 22-0 (failed two-pointer) before Nunez tied Smith with his 36th career rushing td on an eight-yard scamper early in the second that made it 30-0.

“If we played the second half the way we did the first, then I would be happy,” Hill said. “But we didn’t. And to be honest, these kids have to learn to finish. It’s great that we won, but this, by no stretch, was a perfect game.”

Liberal (3-2, 1-1) grabbed some momentum late in the second quarter, driving 52 yards in 11 plays before Zach Mansell, who scored three times on the night, blasted into the end zone from a yard out. Liberal though, failed on the two-point conversion and trailed 30-6 with 1:28 left in the half.

The next time Garden City touched the ball, Nunez was intercepted by Ty Johnson on an overthrown ball down the middle that Johnson returned 30 yards to the Buffalo 20. Four plays later, it was Mansell again, scoring his second rushing touchdown in less than a minute, to pull the Redskins to within 18 at 30-12 (Liberal missed another two-point conversion) at the half.

“We let them hang around, which is very upsetting,” Hill said. “It’s not always going to be like this. We have to have that killer instinct. And right now, we don’t have it.”

Hill’s team responded with a time-consuming march to begin the third quarter that swung the pendulum back in his team’s favor. The Buffaloes converted two third-downs before Nunez etched his name into the record books with a one-yard rushing touchdown, surpassing Smith’s previous all-time mark. Herrera ran in his second, two-point conversion of the night, and the Buffaloes had a 38-12 advantage.

“At times you can see our potential,” Hill said. “But it’s not all time, and that has to change.”

The Redskins, who came into the game 3-1 for the first time since 2013, had a chance to respond the next time they had the ball. But on fourth down-and-4 from the Garden City 34, Juan Ponce and Demarcus Elliott shutdown Mansell for a one-yard loss.

“We just stopped attacking in the second half,” Hill explained. “That’s so frustrating.”

Following an Anthony Flores punt, the Redskins drew closer, driving 87 yards in nine plays, capping it with a one-yard td run by Mansell. Freshman Syris Dunlap added the two-point conversion, cutting the Garden City advantage to 38-20 with 6:36 to go.

Nunez though, answered the bell with his record-tying fifth rushing touchdown of the night just minutes later, putting the finishing touches on an 8-play, 50-yard drive that ended with a one-yard score to make it 45-20. 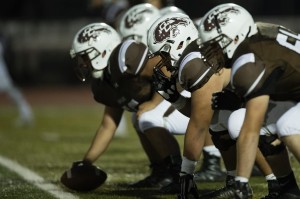 “We have to get things right because the schedule is going to get a lot tougher,” Hill said. I’ll say it: we’ve played a pretty soft schedule to this point. But that’s going to change come next week.”

“It’s those types of plays that have hurt us,” Hill said. “And it doesn’t matter when they happen. It’s the fact that it’s week five and they’re still happening.”

Nunez cemented his record-setting night by going 7-of-14 through the air for 146 yards, a touchdown and a pick. He ran it 22 times for 152 yards and five scores. It was his 11th career 100-yard rushing game.

For Liberal, Jesse Alvarado was 2-of-3 for 14 yards. Dunlap ran it 13 times for 203 and a touchdown while Mansell chipped in 86 rushing yards and three scores.

Notes: Garden City has won eight straight vs. Liberal…The Buffaloes are 5-0 for the second straight season and for just the third time since 2000…Garden City ran it for 248 yards-they’ve now won 11 out of their last 12 games when they’ rushed for 200 or more…Liberal lost the game despite controlling the clock (29:06 to 18:54); Redskins also ran five more plays (55-50)