Garden City, KS (westernkansasnews.com) With the conference schedule beginning in mid-November this season never was it more important to address concerns much earlier than in past years.

Garden City Community College passed their first conference test with flying colors.  The Women had to sweat out a 70-69 win over Butler getting a three pointer from sophomore guard Kavita Akula with 11 seconds left for the game winner.

The men used 3 three pointers early on from Naradain James, Troy Stancil and Jaymond Kelly then used a 191-0 run to pull away in a 105-82 victory over Butler in the men’s game.

On the women’s side things were tight throughout the game with 10 ties and 9 lead changes.  The difference was beyond the arc.  While Butler scuffled through a 1-8 performance on three attempts, Garden went 13-29.

Monica Barefield led all Broncbuster scorers with 22 points on 5-10 shooting from outside the line and Akula went 6-14 from 3 including the game winner.

Despite turning the ball over 25 times to Butler’s 17, Garden had 16 assists to the Lady Grizzlies 3.  Dakota Vann and Nakylia Carter both had a dozen points in the Butler loss.

The men’s game saw Garden City overcome foul trouble from leading scorer Josh Fleming and Aaron Ray.  Both combined for seven points over 23 minutes, but in the end Naradain James scored 23 and added 11 rebounds, Victor Dukes returned to action with 19 and Ben Howze added 18 and 12 rebounds as the Broncbusters shot a whopping 54 percent from the field while holding the Grizzlies to 32 percent.

It was hard to get in a rhythm for both offenses. The game featured a combined 45 turnovers (25 from GCCC) and 58 fouls leading to 81 free throws.  The Broncbusters had a lot of easy buckets when they broke Butler’s press, but at times they committed too many turnovers on their own end.

Garden City is back in action Wednesday night at Barton.  For the men it will be their first road game of the year.  Tip-off is 5:30 from Great Bend. 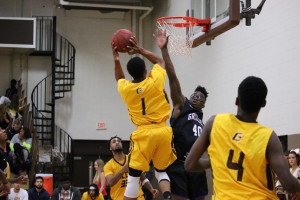 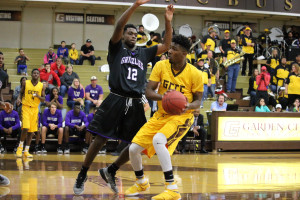 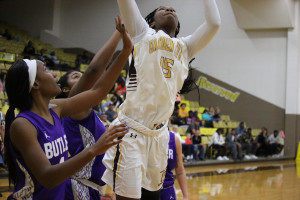 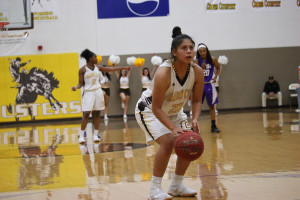