“My biggest fear is the next game, because if we lose that, it means the win over Butler was a fluke.”

Not only was it not a fluke, that victory started something that no one in the country saw coming.

The victory sets up a showdown with Sims’ former team Fort Scott in the regular-season finale. A win, and Garden City will play for their first national title in 16 years.

“We just had to all buy in this week,” running back Taylor Thomas said. “We couldn’t get complacent. It didn’t matter who the opponent was. We knew what we had to do.”

All season long, Garden City’s defense had led the way. On Saturday, they were downright impenetrable. 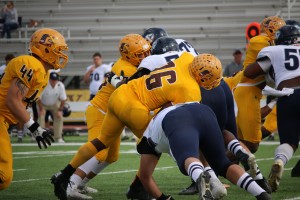 The Broncbusters held Iowa Central (0-2) without a first down for the first 23 minutes, and yielded just 27 total yards in the first half.

“It’s great to have a tremendous defense,” Sims said. “Though, we could tell the season has definitely worn on Iowa Central.”

Offensively, it took Garden City (9-0, 6-0) a full quarter to get going. And it was a special team’s play that sparked the fire.

Mike Hughes’ 40-yard punt return set the Broncbusters up at the Iowa Central 46. Two plays later, Hughes was on the receiving end of Huslig’s 26-yard touchdown pass that gave Garden City a 7-0 lead with 10:46 to go in the first half.

“The players that we have can do so many different things,” Sims said. “That’s what makes this team go.”

Garden City padded the lead the next time they got the ball, driving 60 yards in nine plays; first converting a third-and-2 at the Tritons 35 when Dwyane Lawson zipped a pass to Jayru Campbell for 27 yards. Four plays later, Huslig snuck into the end zone for 14-0 cushion. 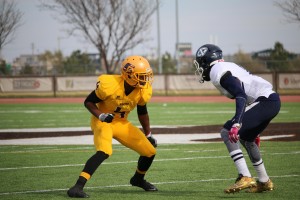 “We’ve worked very hard to get where we’re at,” Thomas said. “We weren’t going to let anyone take what we’ve worked so hard for.”

The Broncbusters had a chance to extend the lead late in the second quarter. And after back-to-back pass interference penalties put the ball at the 2, it seemed like a mere formality that Garden City would punch it in. But on the final play of the half, running back Tra Minter fumbled an option pitch before recovering it back at the 15.

“It wasn’t a perfect performance by any stretch,” Sims said. “But we got the win. That’s all that matters.”

The only real negative to take away from the game came on a questionable call early in the third quarter.

Following an Iowa Central punt, defensive back Bryan Blunt was flagged for targeting during a block, prompting an immediate ejection and a one-game suspension.

“That was an effort play by B.J.,” Sims said. ‘There was nothing malicious about it. We will go back and look at the film.”

Blunt’s ejection provided another spark, and the Broncbusters responded by driving 76 yards in five plays, spearheaded by Huslig’s 69-yard sprint down the middle of the field that moved the ball to the Tritons 8. On the next play, Huslig hit Campbell on a slant for a touchdown making it 20-0 (two-point conversion attempt failed) with 9:08 left in the third. 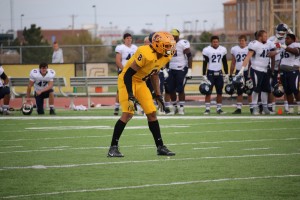 “We are already onto the next game,” Thomas said. “Like Coach Sims always says: the next one is the most important one.”

Lawson added a 43-yard touchdown pass to Ben Phillips and Hughes returned a punt 56 yards for a touchdown in the closing minutes, more than atoning for an earlier return that was called back because of an illegal block.

“We put ourselves in this position,” Sims said. “Now we have to finish the job.”

Minter, who came into the game eighth in the nation in rushing yards, was held to just 26 on 14 carries. Thomas ran it five times for 30; Hughes had 2 rushes for 14 and Lawson nine for 29. The Virginia-Tech transfer was also 7-of-10 passing for 136 yards, a touchdown and an interception. Campbell, who had not caught a pass in the previous two games, reeled in six receptions for 73 yards and a touchdown.

Brady Beal, who made his first collegiate start for Iowa Central at quarterback, was just 3-of-8 for 27 yards. Devin Tripp carried the ball 19 times for 35 yards and Kurt Trumm had two catches for 12. 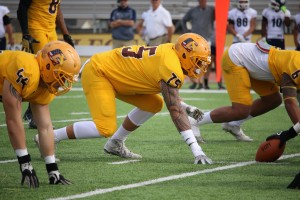