On November 4, 1978 she married Darrell at the Scott City, KS. He survives.

As an infant Judy moved back to the states with her family. Judy lived in many different places including Guam, Ft. Lewis,WA, and El Paso, TX where she graduated from high school in 1971. After graduating she moved to Luray, KS then moved to Scott City, KS where she went to work at the News Chronicle. On Halloween of 1977 she went on her first date with Darrell; they later married. In 1985 Darrell and Judy moved to Liberal, KS. She enjoyed sewing, knitting and crocheting.

Judy is also survived by her Brother, Richard A. Foulke of Lucas, KS; Sister, Patricia Ann Nichols of Tucson, AZ.

She was preceded in death by her parents.

A Memorial Service will be announce at a later date. 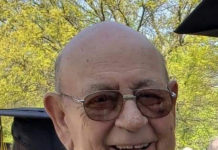