Garden City, KS (westernkansasnews.com)-Matt Pfeifer’s challenge in taking over a young core during his first year as Garden City girls coach was apparent. That task became even more daunting when Abbie Dart was lost for the foreseeable future with a stress fracture in her leg.

But even without Dart, the Buffaloes appeared unstoppable for most of Friday night’s showdown with conference-rival Great Bend. However, one stretch in the third quarter, killed all Garden City hope.

Carley Brack scored 14 of her game-high 29 points in the second half, Carly Dreiling added 15 and six boards, and Great Bend stormed back from 18 points down in the first half to beat Garden City 68-58 Friday night at the Garden.

“It’s disappointing,” Pfeifer admitted afterwards. “We have to learn how to play with the lead. We have to stop turning the ball over.”

After giving it away a season-high 31 times on Tuesday vs. Hugoton, the Buffaloes added 21 more against Great Bend. And it was all thanks to a full-court press that had Garden City retreating over the final 16 minutes. 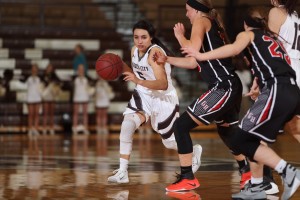 “We faced some adversity and didn’t handle it well,” Pfeifer said. “

Garden City jumped out of the gates, building a 29-11 lead with 5:34 remaining in the first half following Beth Guymon’s 3-pointer from the left wing in transition and Kyra Bellows three-point play. But as she did most of the night, Brack kept the Panthers afloat, scoring 12 of Great Bend’s 16 second-quarter points, pulling her team to within 10 at the break.

“We kept telling our girls that Brack is going right,” Pfeifer said. “But no matter how many times we said it, it never registered.”

To Pfeifer’s point: no one could stop Brack going right. But then again, she proved going left wasn’t much of an obstacle either.

“Great Bend just kept chipping away,” Pfeifer said. “Give them credit. But we had this game.”

Brack gave the Panthers their first lead of the night with a layup 40 seconds into the final stanza. Kate Warren added an easy deuce; followed by buckets by Camryn Dunekack and Carly Dreiling that put Great Bend up seven. Garden City never got any closer than five the rest of the way. 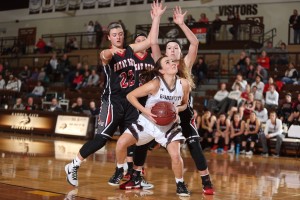 Alyssa Long scored eight of her 15 points in a first quarter where Garden City shot 9-of-15 from the floor and outscored Great Bend 22-9. Aerianna Stinemetz and Josie Calzonetti each chipped in 12; Guymon netted eight.

Cowboys all the way; Tyreek Hill commits to OSU–audio