Garden City, KS-The last two weeks has tested the resolve of Jacy Holloway’s team. Losing one of his key role players did not make things any easier.

But with Derrick Sexton gone for good after moving out of the district, the Buffaloes finally collected themselves and put together their best stretch of basketball in 2018.

Tye Davis scored a season-high 13 points on 5-of-9 shooting, Jarrod Springston added 12 and a season-best seven boards, and Garden City ran right through Ulysses 56-39 Tuesday night at the Garden. The win snapped a four-game skid, and inched Holloway one game closer to 80 career victories.

“We kept stressing that if you have a good shot, pass and get a better one,” Holloway said. “I think we really made a conscious effort to do that tonight.”

Garden City’s ball movement was fantastic. But it was their shooting and defense that stole the show.

The Buffaloes scored the first eight points of the game, and led 16-6 after one. And while the offense was cooking, Garden City (7-6, 2-1) forced four Ulysses (7-7, 2-3) turnovers and held the Tigers to just 3-of-9 from the field in the first period.

“Our defense was better in spurts,” Holloway said. “We did things much better, and we switched things up on them. I thought they did well from that standpoint.”

Tye Davis opened the second period with a deep 3-pointer followed by Springston’s layup that pushed the Buffaloes lead to 21-6. They were up 27-17 at the break while the Tigers misfired on 17 of their first 24 shots from the field. 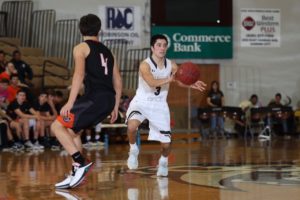 “Our depth has definitely been tested with Derrick gone,” Holloway said. “But I thought Jarell (Coleman) played really well tonight. We were able to give Demarcus (Elliott) more rest.”

Coleman tallied a season-high seven points off the bench, including a three-point play early in the final period that gave Garden City their largest lead of the night, 43-25 with 7:16 to go.

“I thought we exercised more patience tonight,” Holloway added. “That’s why we shot the ball so well. We picked our spots, and the guys did what they had to.”

The Buffaloes were efficient from distance, splashing home 5-of-13 triple attempts. Davis was 3-of-5.

“We get on Tye sometimes to shoot the 3 more often,” Holloway said. “He’s got a good shot, and he will pass up some open ones sometimes.”

Carlos Acosta scored in double figures for the second time in his last three games, totaling 11 points on 4-of-7 from the field. Elliott added six and six boards.

Bryan Garcia netted 14 points for the Tigers on 6-of-10 shooting, but the rest of the team was a combined 11-of-43 (26 percent). Julius Sifuentes added 10 as Ulysses lost their third straight game. They’ve dropped five out of their last eight after a 4-1 start.