“The entire State of Kansas has been considered in drought or abnormally dry conditions for the past several weeks,” said Governor Colyer. “This has led to an extremely high risk of fire hazards and many have already occurred.”

According to the National Weather Service in Dodge City it’s been 157 days since Dodge City had over one tenth of an inch of rain.

The drought declaration placed 28 counties in emergency status, 29 into a warning status and 48 into a watch status. This action was recommended by Tracy Streeter, Director of the Kansas Water Office and Chair of the Governor’s Drought Response Team. Over the past six months the state-wide average precipitation was only 66 percent of normal and in January and February the state-wide average precipitation was even less, at 43 percent of normal.

“While wildfires are the most urgent concern at this point, water supplies can be dramatically impacted in a very short period of time, especially as we start to enter into spring and summer months,” said Streeter. “The Governor’s Drought Response Team will continue to monitor the situation closely as future outlooks call for drought persisting and make recommendations to the Governor as necessary.”

Secretary of Agriculture McClaskey, who was also present at the press conference, remarked on the potential impact the drought could have on Kansas agriculture, saying “The Kansas Department of Agriculture is committed to serving Kansas farmers and ranchers, especially during challenging times like the current drought. Whether that means making sure regulations and statutes are in place to move hay or working with our federal partners to gain access to additional grazing land, we stand ready to work with farmers and ranchers and all of our partners in agriculture.”

Counties who are in emergency stage are eligible for emergency use of water from certain state fishing lakes due to the Kansas Water Office (KWO) Memorandum of Understanding (MOU) with the Kansas Department of Wildlife Parks and Tourism (KDWPT).

For more detailed information about current conditions, see the Kansas Climate Summary and Drought Report on the Kansas Water Office website at: www.kwo.ks.gov 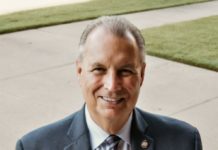 Questions Best Way to Prevent Being Scammed Over the Phone

Some Who Think They Have Healthcare Coverage Are Getting Unexpected Surprise