Liberal, KS(westernkansasnews.com) The Dodge City A’s blew a 9-3 lead in the bottom of the ninth and lost 10-9 at Liberal Saturday night.

In the bottom of the fifthe the Bee Jays(13-7) got on the board with an RBI sac-fly from RJ Pearson to make it 7-1. Liberal would score again in the seventh with a two-run single from Justin Marino, cutting the lead to 7-3.

The A’s(7-8) extended the lead in the ninth with an RBI single by Anthony Marquez and an RBI fielders choice from Hollar making it 9-3. Things fell apart for Dodge City in the bottom half starting with a double by Jack Krauel on a ball that right fielder Daylan Nanny dove to try to catch. Blake Brewster then reached when shortstop Carlos Arrellano tried to get Krauel at third, but the ball hit Krauel sending it to foul territory and Krauel in to score. Following a walk to Johnathan Tapia, Clint Allen reached on an error by third baseman Isaiah Haddad to load the bases. Dane Simon then delivered an RBI sac-fly to cut the lead to 9-5.

Peyton Johnson followed with a single to load the bases again for Liberal. Brock Burton followed with a two-run double and Chase Hacker with an RBI single to cut the lead to 9-8. Then the man who started the rally Krauel delivered the game-tying single with two outs. Carlos Arrellano then struck out Brewster to extend the game to extra-innings.

For as much offense as there was through the first nine innings the extra-innings were about pitching and defense. For the A’s Arrellano pitched 5.1 scoreless innings in relief surrendering just two hits and two walks. Ryan Thomas threw five scoreless innings for the Bee Jays allowing just one hit.

There were fireworks in the twelfth inning for the A’s when Owen Jansen was initially called safe on a close play at first, but after Liberal coach Bill Clay made a brief argument the umpires changed the call ending the half of the inning. The decision set-off A’s coach Tony Gonzalez, who was then ejected.

“Of course I’m going to get upset, I’m going to fight for my guys. I just told him how I felt about the day,” said Gonzalez, “He could’ve kicked every guy in both dugouts over the course of the game, from my perspective when you start pointing fingers in one dugout and you’ve tolerated everything in the other dugout it kind of tells me what’s really going on and I’ll just say it, we got homered today and it is what it is and it has nothing to do with the Liberal Bee Jays, it had to do today with the umpires.”

In the fifteenth inning Arrellano moved back to shortstop and Daylan Nanny replaced him on the mound. After Dane Simon was hit by a pitch to put runners on first and second with one out Arrellano was ejected after saying something to the umpire. Brock Burton then delivered a walk-off RBI single for Liberal to win 10-9.

Christian Isenhour got the win for the Bee Jays pitching just one three up three down inning. Combined the two teams used 11 pitchers. 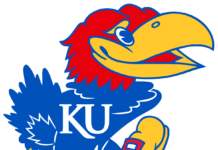