The Garden City High School Drama Department is proud to announce its 2019-2020 season.  The department will begin the year with a new musical called Miss You Like Hell by Quiara Alegria Hudes and Erin McKeown that GCHS is proud to be working with Theatrical Rights Worldwide to create a new school edition on September 13th-15th.  Miss You Like Hell is the story of an estranged mother and daughter, Beatriz and Olivia.  Beatriz, the mother, is an undocumented immigrant on the verge of deportation, when she shows up to take 16 year old Olivia on a road trip across the United States.  On their trip they meet many Americans of different backgrounds but shared dreams.  Quiara Alegria Hudes is a Pulitzer prize winning playwright of Water by the Spoonful and she also wrote the book for the musical In the Heights.  Erin McKeown is best known as a singer-songwriter. McKeown and Hudes teamed up to write a powerful new show with vast heart and fierce humor that ran at the Public Theatre in New York in 2018.  This musical will be adjudicated for the Kansas State Thespian Festival.

The second production of the season will be the hit Disney musical Newsies with Music by Alan Menkin, Lyrics by Jack Feldman, and Book by Harvey Fierstein on November 15th-17th.   Menkin has won eight Oscar Awards, 11 Grammys, and a Tony award for his work. His credits include: Aladdin, Beauty and the Beast, and The Little Mermaid for Disney. Feldman and Menkin won the tony Award for Best Original Score for Newsies.  Fierstein is a Tony Award winning actor and writer, having originated the role of Edna Turnblad in Hairspray. He also won a Tony Award for writing the book for Kinky Boots with Cindi Lauper.  Based on the 1992 movie, this musical depicts the newsboy strike at the turn of the century in which young people in New York took on Joseph Pulitzer, one of the most powerful men in New York City.  This musical will feature current students, elementary and middle school students, alumni, and adult actors.  Newsies will be adjudicated for Music Theatre of Wichita’s Jester Awards.

The third production will be a new drama by John Patrick Shanley called Prodigal Son that will be performed February 21st-23rd.  This play is autobiographical of the author’s life. A 17-year-old boy from the Bronx suddenly finds himself in a private school in New Hampshire.  He’s violent, gifted, alienated, and on fire with a ferocious loneliness.  Two faculty members wrestle with the dilemma: Is the kid a star or a disaster? A passionate, explosive portrait of a young man on the verge of salvation or destruction.  Shanley is an award winning playwright having won a Tony Award and a Pulitzer Prize for his play Doubt; he also won an Oscar for his film Moonstruck starring Cher.

The final production of the season will be William Shakespeare’s comedy Much Ado About Nothing and will be performed by the Advanced Repertory Theatre Play class on April 3rd-5th.  This is one of Shakespeare’s most famous comedies.  This play depicts a group of young soldiers who have just returned from war to find love while visiting the home of Signor Leonato.  The path to love is never an easy one as hilarity ensues while pursuing the affairs of the heart.

The GCHS Drama Department is also seeking sponsorships from businesses and individuals. The department has offered season passes and family passes the past two years, however this year they will only be offering sponsorship passes. There are sponsorship levels starting at $25 through $500.  Each sponsorship level provides benefits including listing in our programs, sponsorship tickets, and a tax deductible donation. Consider sponsoring today.  It you are interested please contact Alice Hilt at ahilt@gckschools.com. 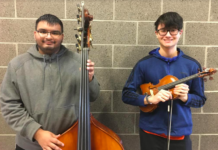