DODGE CITY, KS — City Manager Cherise Tieben announced that Ken Spencer has been appointed as the next Fire Chief for the City of Dodge City effective September 21, 2019, when current Chief, Robert Heinz, plans to retire. Spencer has been serving in the capacity of Deputy Fire Chief since 2015.

Spencer joined the Dodge City Fire Dept. as a firefighter in June of 1997.  His promotions throughout the years include Fire Engineer, Fire Captain in 2004 and Deputy Fire Chief in 2015. 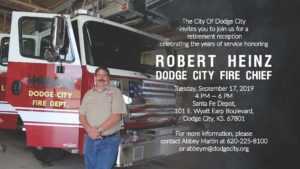 “Ken’s twenty-two years of experience with the department, as well as his serving in the deputy position for four years, has prepared him to take over the leadership of the department,” Tieben said.  “We are excited for Ken to complete his career as the next Fire Chief of Dodge City.”

The Dodge City Fire Department would like to invite the public to attend a retirement reception for Chief Robert Heinz on September 17, 2019, from 4 – 6 pm in the El Vaquero dining room of the Santa Fe Depot located at 201 E Wyatt Earp.

Let’s Talk This Out