Entitled “Institution with a Distinctive Heritage,” the display draws its name from a 1960s era sign that marked both the former and previous campuses of the college.  The exhibit includes nearly 20 early photographs, six historic documents and a few artifacts representing GCCC’s 100 years of service to the community and to Southwest Kansas. 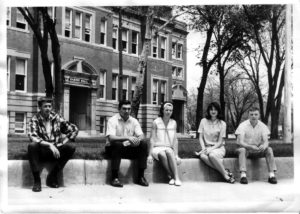 Among the oldest items are a 1918-1919 advertisement promoting the then-upcoming opening of the school and the first Manual of Studies for students, published in 1919 by Ernest F. Monroe, the college’s first dean.  The artifacts also include the shovel used to break ground on the present campus in September of 1967, and scenes from each location where the college has been housed over 10 decades.

GCCC opened as Garden City Junior College in September of 1919, and has served the public longer than any of the 18 other Kansas community colleges.  It is one of four higher learning institutions founded in 1919, two of which survive, and part of a network of approximately 1,200 community colleges across the nation.

The exhibit, which will remain in place past GCCC’s centennial celebration activities Sept. 27-28, incorporates photographs from the museum’s collection and items loaned by the college.  The museum credited the assistance of Ashley Salazar, college public relations director, and Mike Pilosof, college sports information director. 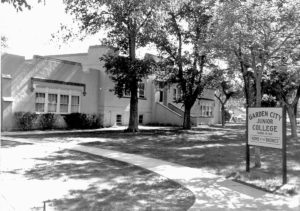 The Front Door Gallery is a small space near the museum’s entrance where exhibits change repeatedly.  The museum is located at 403 S. Fourth in Garden City’s Finnup Park, and viewing is open 1-5 p.m. seven days weekly.

Admission is free and visitors may also see approximately a dozen additional displays, including “Spirit of the Plains,” small photo collections featuring Finney County’s Blizzard of 1957, Flood of 1965 and Tornado of 1967, and a 525-square foot “True Crime” exhibit that explains how the killers were brought to justice after the notorious Clutter murders of 1959 and the string of robberies and shootings carried out by the Fleagle Gang during the 1920s.

Haskell and Finney County roads to close at U.S. 83