“Kate is an experienced and accomplished attorney,” Schmidt said. “I am grateful that she has agreed to lead our consumer protection division in the important work of protecting Kansas consumers from scams and helping victims of scams recover what they’ve lost.”

The consumer protection and antitrust division investigates scams, mediates and prosecutes violations of the Consumer Protection Act, the No-Call Act, the Roofing Registration Act, the Charitable Organization and Solicitations Act, the Kansas False Claims Act, the Wayne Owen Act and the Kansas Restraint of Trade Act.

During Schmidt’s administration, the division has recovered a total of more than $225 million, by far the most in state history. 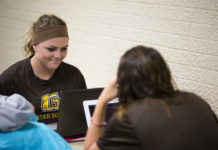 Kicking Up Some Boots for MDA