DODGE CITY, Kan., October 15, 2019 — A musical examination of the lives of three legendary Mexican icons comes to Dodge City as the Core Ensemble once again brings its unique blend of culture, music, and drama to town for the production of “Los Valientes.”

“Los Valientes” (The Courageous Ones) explores the artistic and political passions of Mexican painter Diego Rivera, the unwavering commitment to human rights of Salvadoran Archbishop Oscar Romero, and the pursuit of social justice by Mexican American desperado Joaquin Murrieta, aka Zorro.

The performance will be at the Dodge City Community College Little Theater Friday, October 18 at 7 PM. The event is free but donations are always welcome and help to fund next year’s event.

The show is a joint effort – sponsored by the Community Foundation of Southwest Kansas and the United Way, in conjunction with the HALO, the DC3 International Club and the DC3 Choir Club.

“Los Valientes” promises to be a high-quality entertaining and enlightening presentation, according to Pat Hamit, executive director of the Foundation.

“There are plenty of things that are sponsored in this community don’t necessarily emphasize the area’s Hispanic background,” Hamit said. “These productions really speak to the Hispanic heritage and history of Dodge City.” 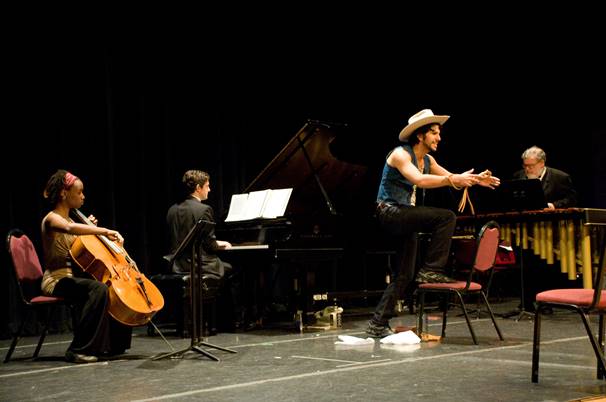 The Core Ensemble travels the country putting on various productions that focus on notable cultural and ethnic heritage figures representative of broader political, gender, and racial journeys. The group is deeply committed to reaching a wide geographic and demographic range of audiences.

Most of the songs are sung in Spanish, but all of the dialogue is performed in English.

“They are icons in the Hispanic community,” he said. “We hope that the audience will be diverse and include a lot of different backgrounds. We want the performers to get a taste of this area as well.”

The production is part of The Core Ensemble group. Founded in 1993, The Core Ensemble has been acclaimed as a developer of new chamber music theater genres featuring the unique instrumental combination of cello, piano, and percussion – accompanied by a cultural minstrel performing spoken and sung verse.

The Core Ensemble travels the country putting on a handful of different productions that focus on notable cultural and ethnic heritage figures representative of broader political, gender, and racial journeys. The group is deeply committed to reaching a wide geographic and demographic range of audiences.