Scott City, Kan. (westernkansasnews.com)—Scott City knew that if they played their game on Saturday, they would be in a good position to do something they haven’t done since 2011, which is win their own invitational. It was also an emotional day for the three seniors who have been a part of the varsity program for the last three years. It was their final time they would play in their own gymnasium. They would not disappoint, as Scott City not only went 4-0 on the day, but also captured the Scott City Invitational Volleyball Tournament, and doing so without losing one set on the day. The seniors would also cap off their home playing career undefeated at home this year, with a 7-0 home record.

Norton would be the third opponent of the day. This one would turn out to be a very intense match. The tightly-contested match would see 19 ties, 13 in the first set, and 13 lead changes, nine in the first set. Both teams would not score more than two consecutive points in the opening set, until the Lady Beavers went on a 6-1 run to take a 17-11 lead. However, the Lady Bluejays would rally a little bit at at time. Trailing 22-18, Norton scored six of the next seven points to take a 24-23 lead. It would go back and fourth, and Scott City would score the last two points after it was tied at 25, to take the 27-25 first set win. In the second set, the Lady Beavers jumped out to an early 8-4 lead, before Norton rallied to pull to within 11-10. Trailing 14-10, the Lady Bluejays scored six straight to lead 16-14. Scott City regrouped and would take an 18-17 lead. They built their lead up to 23-20, before Norton scored two two straight to pull to within one. However, the Lady Beavers had just enough to close the match out with two straight to take a 25-22 win to take the match in straight sets.

To wrap up the day, Scott City would face Lakin for a second time this season. The Lady Broncs came in on the day 1-2, and the Beavers off a highly-contested match. Scott City was never really challenged in this one and never trailed in the first set. They built up a 8-3 lead, and grew it to 11-5 midway through the first. Lakin made one big run to pull to within 12-11, but the Lady Beavers settled down and used a 5-1 run, and never looked back. They closed the first set with five straight points to win 25-18. Lakin would grab an early 3-1 lead in the second, but that would be short lived. Scott City used a 10-2 run to lead 11-5, forcing a Bronc timeout. The Lady Beavers would lead by as many as eight at 20-12, and Lakin made one final push to get to within 24-21, before Scott City scored the final point of the match to take a two-set victory.

Scott City is now 24-2, and have won 21 consecutive matches. They’ll be at Cimarron on Tuesday for a quadrangular. 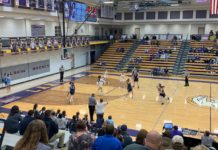 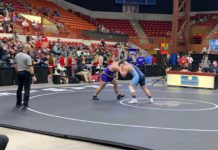 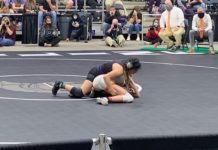