Applications are available at City Hall, 806 N. Second Ave. or by calling 225-8100.  Information about the boards and commissions, as well as an online application, can be viewed at http://www.dodgecity.org/82/Boards-Commissions.

Completed applications should be sent to:

Or by e-mail to abbeym@dodgecity.org.  Questions regarding the boards/commissions can be directed to Abbey Martin at 225-8100.

If more applications are received than there are available positions, the applications will be kept on file in the event an opening occurs during the year.  Appointments will be made at the January 6, 2020, City Commission meeting. 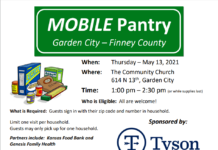 Kids know how important it is to “Put the Brakes on...