Scott City, Kan. (westernkansasnews.com)–In an opening night of play, teams enter with a sense of excitement and nerves when they take the court for the first time in a season. Friday night’s doubleheader between two old rivals 24 miles apart saw one game see a record shattered in the girls game, as Scott City girls would hit the century mark in a 104-15 win, while the boys from Scott City pulled away in the second half for a 65-36 victory.

Scott City girls 104, Wichita County 15
Scott City coach Sarah McCormick wanted to see her team to have a killer instinct this year. Well, after just one game, it’s safe to say that the Lady Beavers took that to heart. This game was over early on. Scott City would score the first 20 minutes before Wichita County attempted and hit their lone field goal of the first half with 4:01 remaining in the opening period. The Lady Beavers would force 15 turnovers in the opening eight minutes and led 33-2 after the first quarter. Scott City would go on runs of 20, 19, and 20 points in the first half, en route to a 59-3 lead at the break. The Lady Indians scored the first points of the second half, and scored nine third period points. After leading 87-12 heading into the fourth quarter, the Lady Beavers would still score 17 points with a running clock in the final period in a 104-15 win.

Six players scored in double figures for Scott City, led by Lyndi Rumford with 21 points, Emily Weathers had 19, Brynn McCormick added 15, Kennedy Holstein had a career-best 11, and Ella Rumford and Amber Latta each had 10 points. All 10 players that suited up for Scott City scored. They were 8-11 at the free throw line, and out-rebounded the Lady Indians 29-13. Wichita County was led by Brooklyn Burch with seven points. They were 2-4 from the foul line.

In the win, Scott City shattered the record for most points in a game with 104. Their previous high was 82 in an 82-65 win over Russell in sub-state play in 1994. They had also scored 81 against Colby two games prior. The Lady Beavers had 82 points with 1:47 left in the third quarter, and broke the record with 46 seconds left in the third period. It was also their most lopsided win in school history, beating the record set in 2009, when they beat Flint Hills Job Corps 78-11 in the Orange & Black in Colby. Scott City has now won nine straight in the series dating back to 2007, including six straight in Scott City. Since 1984, the Lady Beavers lead the series with the Lady Indians 25-15.

Scott City Boys 65, Wichita County 36
The nightcap would be a close game for about two and a half quarters. Scott City never trailed, as they jumped out to a 7-0 lead, only to see Wichita County go on an 8-2 run to get to within 9-8 with 3:34 left in the first quarter. An Indian 5-0 run would tie the game at 13 at the two minute mark of the opening frame. The Beavers began their first surge, taking an 18-13 lead after the first quarter. Their run would be 13-2 over a five minute stretch to lead 26-15 with 4:10 left in the first half. Scott City got their lead to 31-17 with 1:25 left before half, when Wichita County used a 6-2 run to pull to within 10 at the break at 33-23. In the second half, the Indians would get as close as 39-32 midway through the third quarter. They had several chances to get to within two possessions but failed each time. Scott City used their biggest run to put the game away, closing out the third quarter with a 12-0 run to lead 51-39 after three quarters. That run ended going to 14-0. Over the final 10:31 of the game, the Beavers closed on a 26-4 run to pull away for the win. The Indians were only able to score 13 second half points, and four in the fourth quarter.

Leading the way for Scott City was Evyan Smith, who had a career-high 22 points, while Hunter Yager had nine of his 11 points in the second half, and Jackson Lewis added 10. The Beavers were 14-24 from the line, and won the rebounding battle 43-28. Gabe Hernandez had a team-high 15 points for Wichita County, who was 9-18 at the foul line.

With the win Scott City has now won their sixth consecutive season opener, and their 18th in the series and 22 out of 23 against Wichita County, with 14 of those games being in Scott City. The Beavers lead the series 26-15 since 1984.

Scott City will host the first two games of the Clarion Inn Roundball Classic on Thursday and Friday, facing Coronado out of the Colorado Springs area on Thursday, Wichita Trinity on Friday, and will play against Garden City in Garden City on Saturday. Game times on Thursday and Friday will be a 6 pm tipoff for the girls, with the boys at 7:30. The Girls game on Saturday, December 14 with Garden City will be at 4:15, while the boys game is at 7:45. Wichita County will open up play at the Sagebrush Shootout in Brewster on Monday. The girls face Wallace County and the boys take on Weskan. 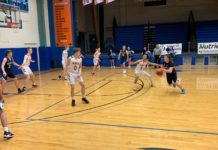