Colby, Kan. (westernkansasnews.com)–When you are in a mid-season tournament, one of the biggest goals for your team is to finish 2-1. Scott City’s girls had accomplished that feat by putting themselves into the 35th Paul Wintz/Tom Bowen Orange & Black Classic, while the boys needed a win Saturday to accomplish that feat. It would be a good day for both Beaver teams, as they rallied a pair of wins, as the Lady Beavers would force overtime and eventually take a 53-48 win, while the boys overcame a tough first half, and pulled away for the 55-43 win.

Scott City Girls 53, Colby 48, OT
It would be a battle of top four teams in Class 3A, as No. 4 Scott City looked to avenge their lone loss of the year 15 days ago against No. 3 Colby. The Lady Beavers got off to a hot start for a third consecutive day, racing out to a 12-3 lead with 4:14 left in the first quarter. Colby responded with an 11-2 run to pull to within 14-11 after the first quarter. The Lady Eagles would take their first lead of the game at 17-16 with 2:23 left before half, and the teams would exchange leads, before Scott City led 21-19 at the break. Colby retook the lead in the opening seconds of the second half, before the Lady Beavers rallied to take a 27-25 lead with 2:40 left in the third. The Lady Eagles would hit five three’s in the third, that included a rare four-point play, with all coming in the final three minutes of the third to grab their largest lead of the game at 38-31 after three quarters. Scott City (10-1) would begin their comeback with five straight points to get to within 38-36 early in the fourth. They would not trail by more than five points, with the last coming at 45-40 with 3:06 left. Colby (11-1) would go scoreless for the rest of regulation. The Lady Beavers would tie the game at 45 on a three pointer with 1:38 left. Both teams had a chance each after that, as the Lady Eagles missed a layup and Scott City was called for a charge with 1.8 seconds left. That would force overtime. In the extra four minutes, The Lady Beavers would hit the first basket 45 seconds in and a pair of free throws to go up 49-45 with 51.1 seconds left. Colby went back down the floor and drained a deep three to pull to within 49-48 with 26.8 seconds left. Scott City would hit four straight free throws, and win a thriller in the Orange & Black Championship game.

Scott City had three in double figures, led by the Most Valuable Player of the tournament Brynn McCormick with 18 points, followed by Emily Weathers with 16 and Lyndi Rumford with 10. Rumford and Weathers were also named to the All-Tournament Team, and Madison Shapland was selected to the girls All-Academic Team. The Lady Beavers went 11-14 at the foul line for the game, including a 9-10 effort in the fourth quarter and overtime. Colby was led by Jill Stephens with a game-high 21 points, while Hallie Vaughn added 11. Stephens and Vaughn were on the All-Tournament Team. Colby went 11-33 from the three-point arc, as Stephens hit six triples in the game. Scott City dominated the glass 30-19.

Scott City Boys 55, Green Valley Ranch 43
Scott City met up with Denver School of Science & Technology-Green Valley Ranch for the first time in school history. It was Green Valley Ranch’s second year in the Orange & Black, while the Beavers were wrapping up their 19th appearance. Scott City grabbed the early lead, and led 7-5 with 4:11 left in the first quarter, before the Raptors erupted for a 12-0 run to close the first period to lead 18-8. Green Valley Ranch (9-2) led by as big as 11 at 23-12 with 1:57 left before the break. That’s when the Beavers would find some life in their offense again. They would close with a 7-4 run, but trailed 27-19 at intermission. To open the second half, Scott City (6-5) started off with a tear, using a 16-3 run over a five and a half minute span, and lead 35-30 with 2:31 left in the third frame. Green Valley Ranch responded with a 7-2 run to close the third, as the game was tied at 37 going to the fourth quarter. The Beavers used a 13-2 run to lead 50-39 with 2:07 left. The Raptors would get as close as nine twice after that, and Scott City would pull away for a 55-43 win. The Beavers scored 13 of their 18 points from the free throw line in the fourth quarter.

Jackson Lewis would put together one of the most impressive half’s in a while. After going scoreless in the first half, he would score 21 points, including going 10-12 from the line. Hunter Yager added 10 points, as he was named to the All-Tournament Team. Parker Gooden was selected to the boys All-Academic Team. Scott City finished 15-20 at the foul line and had nine turnovers. Green Valley Ranch was led by Luke Williams with 16 points and 11 from Barrington Black. The Raptors shot just 4-10 from the free throw line and had 11 turnovers.

With the win, Scott City closed out their 19th Orange & Black appearance with a record of 37-20, including a 4-1 mark in fourth place games. It was the first time the Beavers have won back to back games this year. Green Valley Ranch went 1-5 in their two years in the tournament.

Scott City will have a few days off before hosting Lakin on Friday, January 31, at the Scott Community Events Center. 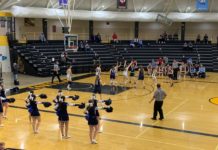 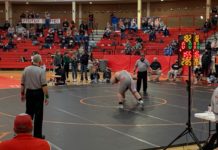