Concordia, Kan. (westernkansasnews.com)–Eighteen area wrestlers from four of the Class 4A schools from southwest Kansas qualified for the 2019 Class 4A State Wrestling Tournament next Friday and Saturday in Salina. After there were eight that punched their ticket on Friday, 10 more made their way through the consolation side to advance to state.

Ulysses qualified eight wrestlers at the Wellington regional, and had regional titles by Quentin Pauda at 106 and Ayston Perez at 285. Scott City put in seven wrestlers in Concordia, with three champions. Kaden Wren at 138, Cale Goodman at 182 and Gabe Bowers at 285. Hugoton got a regional championship from Adam Mendoza at 138, as he was one of two qualifiers for the Eagles in Wellington. Holcomb qualified one wrestler in Wellington. 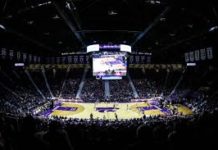