Lee Richardson Zoo is happy to announce that Johari, a critically endangered black rhinoceros who lives at the zoo, is pregnant.

Ten-year-old Johari and her mate, seven-year-old Jabari, came to the zoo in 2016 on a recommendation from the Association of Zoos and Aquariums’ Eastern Black Rhinoceros Species Survival Plan (SSP).  SSPs are cooperatively managed programs with goals of genetically and demographically healthy populations, the long-term sustainability of populations, and enhancing the conservation of the species in the wild. 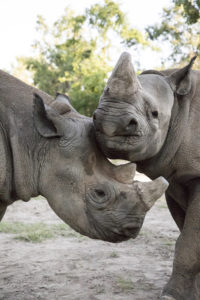 Staff have been monitoring Johari’s condition via periodic blood samples.  Her latest blood tests show the typical profile of a pregnant rhinoceros.  The zoo will continue to monitor the pregnancy via blood tests and work on operant conditioning for an ultrasound to provide another means of monitoring the pregnancy.  Rhinoceros gestation is 15-16 months.  Johari is estimated to be approximately half-way through the pregnancy.

Eastern black rhinos are native to eastern Africa (Kenya and Tanzania). They are listed as Critically Endangered by the IUCN (International Union for Conservation of Nature).  They are the rarest of the three remaining black rhino subspecies.  Poaching for their horn continues to be their biggest threat.  Conservation and management efforts have resulted in a slow increase in population numbers in recent years.

Black rhinos are browsers.  They use their prehensile upper lip to grab and hold leaves and branches and guide them into their mouth.  They may look big and bulky, but a black rhino can run at speeds up to 40 miles per hour.