Meeting Dennis Grubbs, there is no denying that he is a bit of a cowboy.  Get past the blue jeans, boots and cowboy hat, and you’ll see there’s more to Dennis than meets the eye.

Born and raised in Lakin, he has lived in Kearny County his entire life.  While he did rodeo and cowboy around in high school, he was probably better known for playing center and defensive end on the football team.  He was the first student from Lakin ever invited to play in the Shrine Bowl and he was offered a scholarship to play football at Kansas State University. But a broken pelvis suffered during a rodeo event, side-lined his football career and he had to watch the Shrine Bowl from the bench.

Following high school, Grubbs went on to work as a cowboy for 17 years at the Tate Ranch and later farmed before joining KDOT as an Equipment Operator Trainee on the Lakin Subarea crew in 1995.  He was promoted to Equipment Operator in 1996, to Equipment Operator Specialist in 2008 and to Highway Maintenance Supervisor in 2015.  In 2017, Grubbs transferred to the District Paint Crew in Garden City.

Grubbs says he came to KDOT for the insurance. “I was married and had kids.  I needed insurance,” he said.  “But KDOT has been there for me.  I’ve had many surgeries over the years.  When I was out of sick time, my co-workers donated their leave to help me.”

Whether he remembers snow plowing the way for the ambulance from Lakin to Garden City, or recalls pulling a co-worker out on K-156 and then going on to help a stranded truck driver, it’s clear that Grubbs likes the public service part of his job as much as the insurance and benefits.

Dennis has three children and 13 grandchildren.  When he’s not striping the highways and plowing snow, he’s busy running cattle, taking care of his horses and miniature donkeys, and occasionally finds time for pheasant and deer hunting.

Thank you, Dennis Grubbs, for your 25 years of service to KDOT and Southwest Kansas. 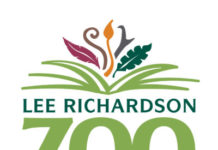