Business leaders selected for the KBHF are widely known for their contributions to Kansas and are recognized as role models. The KBHF recognizes historical contributors and present-day leaders who have made private enterprise work in Kansas and throughout the country.

Cecil L. O’Brate was born in Enid, Oklahoma, in November 1928. As a child growing up during the Great Depression, O’Brate experienced and recognized poverty, determining to change his fortunes and the fortunes of others. To provide for his family, he worked many jobs from ages 10 to 16, including newspaper delivery boy, grocery store stocker, and gas station attendant. Prior to his senior year of high school, O’Brate moved with his grandparents to Syracuse, Kansas, to custom farm 3,000 acres. By a year’s end, O’Brate saved earnings for college and made two important discoveries: a passion for farming and a love for his future wife, Frances Cole.

In 1946, O’Brate returned to his native state to begin engineering studies at Oklahoma State University, working jobs to pay his tuition and other bills. Soon, an offer and plea for help from his Kansas grandfather, who leased an additional 3,000 acres, enticed him to leave OSU and return to farming. O’Brate’s permanent move back to Kansas in 1948 began his legacy in business building. Putting his earnings back into land purchases beginning in 1953, O’Brate’s current farm and grassland holdings number over 35,000 acres.

In 1965, with Garden City as his home and business center, O’Brate purchased the Palmer Manufacturing and Tank Company, which produces fiberglass and steel tanks for the oil and gas industry. Palmer Manufacturing, having grown from two to over two hundred employees with over $70 million dollars in annual sales, was sold to Worthington Industries in 2013, but repurchased by O’Brate in 2018 with a pledge to invest $16 million back into the plant for facility upgrades and to grow jobs.

During the late 1960s through the early 1980s, O’Brate purchased regional banks and opened farm equipment dealerships. While making sales to the oil industry through Palmer Manufacturing, he recognized money making opportunities in oil and gas drilling and production and heavily invested assets in the industry just months before the 1985 oil market crash. O’Brate persevered through the steep drop in oil prices, over seventy percent, and today owns several successful independent oil and gas companies, the two largest being Palmer Oil, Inc., and American Warrior, Inc., with 3,000 producing wells in 35 Kansas counties.

At age 91, O’Brate’s resume currently lists part to full ownership in a 3D seismic oil and gas survey company, a sorghum-based food production company, ethanol production companies, a Garden City industrial park, and residential and commercial real estate development companies. Throughout his prosperous career, not forgetting his years in poverty, O’Brate has donated millions of dollars to nonprofit charitable and other organizations, including Big Brothers Big Sisters, the Boy and Girl Scouts, Youthville, Garden City USD 457, and Garden City Community College. In 2013, Carl and Frances O’Brate established the O’Brate Foundation, which provides emergency funds and college scholarships for students living below the poverty level and who are moving out of the foster care system.

O’Brate recently gifted his alma mater, Oklahoma State University, $35 million toward construction of the school’s new baseball stadium. The sports facility, which is scheduled to open in 2020, has been named O’Brate Stadium. OSU conferred an honorary doctorate on its former student and benefactor in May, 2018.

Walter Herschel Beech, aviator and pioneering aircraft industrialist, was born on Jan. 30, 1891, in Pulaski, Tennessee. His fascination with flight manifested itself in a failed wood and bedsheet glider experiment at the age of 14. As a young adult, Beech and a friend restored a wrecked biplane, and in 1914, he made his first solo flight. Beech gained valuable flying experience during WWI as an Army pilot, instructor, and engineer. In post-war civilian years, he barnstormed throughout the Midwest, exhibiting flying stunts and competing in speed racing.

As Americans’ fascination with aviation grew, in 1921, Beech began his formal employment in the aircraft industry at Wichita’s Swallow Airplane Corporation serving as test pilot, designer, and general manager. In 1924, along with fellow aviation industrialists, Lloyd Stearman and Clyde Cessna, Beech formed Travel Air Manufacturing Company, a producer of high wing monoplanes for private and commercial use. By 1929, Travel Air was the world’s largest commercial aircraft manufacturer, but the successes faded with dwindling sales after the stock market crash. Travel Air merged with the Curtiss-Wright Airplane Company, Beech then acting as vice president of sales.

In 1930, Walter married Olive Ann Mellor, office manager and secretary to Beech at Travel Air. After the Curtiss-Wright plant closed in Wichita, the couple moved to New York City so Walter could carry out his corporate responsibilities. In April,1932, during the dark days of the Depression, the Beeches returned to Wichita and established their own manufacturing plant, Beech Aircraft Company. The first Beech airplane flew in November of 1932, with the company eventually rolling out its innovative Model 17 Staggerwing biplane, so-called because the lower of the two wings “staggered” forward of the upper wing giving a margin of safety in the event of a stall. As the company produced additional models, Beech Aircraft reached an impressive mark in 1938 with one million dollars in sales.

During WWII, the company shifted much of its manufacturing attention to military plane production. By the war’s end, Beech Aircraft, employing nearly 15,000 people in its one million square foot Wichita factory, had delivered more than 7,400 planes to the country’s flying forces. Olive capably stepped into day-to-day plant leadership during the war years while Walter recovered from a major illness. The aviation duo would refit the company for peace time commercial aircraft assembly, only to step back into defense production during the Korean War.

Tragically, Walter Beech’s brilliant aviation career came to an end on November 29, 1950, when he suffered a fatal heart attack. Olive Beech became president of the company after Walter’s death. The company continued successful aircraft production through the decades, additionally supplying products for the NASA’s Gemini, Apollo, and space shuttle programs. In 1980, Beech Aircraft was acquisitioned by the Raytheon Company. Today, Beech planes are a brand of the Textron Aviation Company.

Walter Beech’s legacy as one of America’s great industrialists and aviation pioneers and aircraft design innovators won him a place in the National Aviation Hall of Fame in 1977.

For more information on the Kansas Business Hall of Fame and to read about all the past inductees, please visit http://www.ksbhf.org. 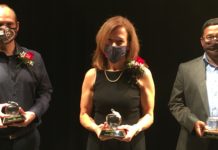