Garden City, Kan (westernkansasnews.com)-The quicker Matt Miller’s team gets back on the field, the quicker he and his staff can put last season behind them.

“We had some things not go our way last year,” Miller said. “So we’re ready to go now. It feels good to start fresh.”

Fresh is a great way to describe the first day of spring practice. With last year’s quarterback duo of Jake Curran and Akeem Jones out of the picture, the second-year head coach is looking for his next signal caller.

In steps Makail Grace, who’s moved from safety to the quarterback position; something he’s pretty familiar with.

Grace played one game behind center last year; it was a relief appearance. Down 13-3 late in the second half against Butler, the freshman was inserted-replacing the struggling Jones. The first play was not something Grace wants to remember-a strip-sack that resulted in a touchdown. 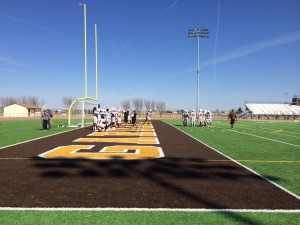 “Let’s be honest, if Makail had more time to prepare, he would have been fine,” Miller said after that game. “We threw him to the wolves, and he tried to make a play.”

Grace looked much more at ease on the first day of practice-throwing perfect fade routs to the end zone. He’s an athletic freak who has the arm strength of Marshall and the elusiveness the Busters severely lacked last year.

He’ll have plenty of weapons to throw to with the return of wide receivers Brandon Snell (had major interest from Utah last year) and Monterio Burchfield.

Besides the quarterback position, Garden City will have to replace a wealth of talent on the offensive line: Ryan Johnson and Dontavious Blair just to name a few. However, Garden City product Mitch Moore returns along with Jarek Smalley, who played well down the stretch for the Busters last season.

On defense, most notably missing is defensive back Tim Hill, who followed former Garden City secondary coach Joe Gordon to Bethany. Also gone is the outstanding linebacker core of Errol Clarke and D’Vonta Derricott; Clarke is headed to Central Florida; Derricott to Kansas State.  But despite the losses, the Busters are not short on talent on that side of the ball.

“I think our secondary will be more athletic this year,” Miller said. “Trevin is very good, and Sam has plenty of Division-I interest right now.”