Tulsa, OK (westernkansasnews.com)-Dodge City Head Coach Sean Ponder’s goal from the beginning was pretty clear: “Our plan is to win a championship,” he said. For what it’s worth-his team took the first step towards that journey on Saturday night.

“It feels pretty good,” Ponder said after the game. “The first year of the Dodge City Law and we’re in the playoffs. It’s a great thing for our community.”

As for their opponent, Oklahoma’s chances of qualifying for the postseason for the first time since 2012 were already on life support. A win would go a long way to salvage what’s been an up-and-down campaign. But the Law quickly doused those hopes on the opening possession of the contest.

It only took Ponder’s bunch two plays to reach the end zone. Following a 12-yard run by Dominique Carson that moved the ball to the Oklahoma 23, Floyd danced his way for six; bursting up the middle before bouncing to the outside. That sprint gave Dodge City (7-3) an early 7-0 advantage.

“We realized that teams are starting to play us differently,” Floyd said. “So Coach Ponder wanted to get me on the move more.”

That philosophy was golden-producing 76 yards rushing on 11 carries and three scores. 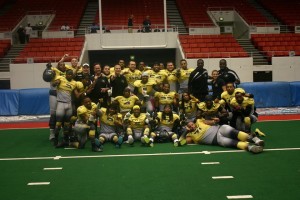 Oklahoma (4-6) seemed to respond well to Floyd’s offensive antics-driving 40 yards in seven plays to the Law 1-yard line. Then the wackiest play of the night.

Defenders quarterback Bo Bartik fumbled the ball on second-and-goal from the one. Walner Leandre pounced on the pigskin, and it appeared Dodge City had made a huge defensive stand. But after a brief conference, the officials determined that Leandre recovered the football in the field of play- then backtracked into the end zone-ruling it a safety.

“That’s one we’ll likely send in for review,” owner Ricky Bertz said during a halftime interview. “I didn’t have a great view of it, but we’ll see.”

Oklahoma could not take advantage of the free kick as Bartik was picked off by Cashmin Thomas at the 15-yard line. A few plays later, Floyd handed it right back-forcing a pass to Kendrick Ings that was intercepted by Ki’Ounnta Cathey-setting up the Defenders at the Law 10. But three straight incomplete passes gave Dodge City possession at their own five. From there, the floodgates opened.

Floyd pushed the lead to 12 when he found Dominique Carson for a 40-yard touchdown pass. On the play, the Law quarterback used a pump faked-moving safety Niko Wright out of the picture and lofted a perfect pass down the left sideline. Carson could have walked in.

“The safety had jumped over to Ings,” Floyd said. “And Carson was wide open.”

On the ensuing kickoff, Jeff Hughley fumbled, and the Law recovered at the Defenders five. Two plays later it was Floyd again finding the end zone, this time from 13 yards out-giving Dodge City a 21-2 lead with 50 seconds to play in the first.

Just when it seemed like Oklahoma was buried, Isiah Anderson brought them back to life with a 39-yard kickoff return to the 10-yard line. Two plays after, Kingjack Washington plunged in from a yard out-cutting the deficit to 21-9 on the final play of the first quarter.

A four-play, 25 yard march that resulted in Floyd’s third rushing touchdown of the game stretched the lead to 27-9 on the first possession of the second quarter. Alex Fambrough missed the extra point.

Just as the Law defense was about to pull the plug on the Defenders season, Bartik hit Anderson for a 39-yard gain on third-and-10. Washington’s one-yard dash to the house just two plays later sliced the Dodge City lead to 27-16.

From there, the Law close the first half on a furry. Carson added a one-yard touchdown run followed by James Cody’s first score in a Dodge City uniform-a two-yard hurdle into the end zone.

Then the defense closed the half with an exclamation point-halting a Defenders drive inside the five when Bartik’s pass was deflected and intercepted by Jarret Bilbrey. Dodge City led at the break 42-19.

On the first series of the third quarter, Oklahoma pulled closer. A 30-yard drive in seven plays-capped off with a Bartik to Anderson three-yard hookup made the score 42-26. But an unsuccessful onside kick gave Dodge the football back at the Defenders 18. Moments later, Floyd hit Maurice Young for 16-yard touchdown pass putting the game out of reach.

Dodge City added another score late in the third: Carson’s seven-yard touchdown reception. Oklahoma countered later in the period when Washington powered in from three yards out. The league’s second-leading rusher finished the night with 10 carries for 25 yards and three touchdowns.

The Law gained 295 total yards-their third highest total of the season behind a 308-yard outing vs. Bloomington and a 299-yard performance in their season opener with Omaha.

Carson capped his night with 10 carries for 31 yards and a score while grabbing a team-high five catches for 74 yards and two touchdowns. Floyd was on point: 14-of-22, 172 yards, three touchdowns and two interceptions.

Bartik was just 16-of-37 for 177 yards, one touchdown and three costly interceptions.

Notes: Dodge City’s win was their fourth in a row…the loss effectively eliminates Oklahoma from playoff contention…The Law improved to 6-1 with Floyd as the starter…The six turnovers forced by Dodge City was a season best and the fifth time they’ve forced three or more in a game…Dodge City has held three straight opponents under 40 points.