Garden City, Kan (westernkansasnews.com)-It had been four years since the last time the Lady Buffs punched a ticket to the state tournament. For their faithful fan base, they don’t have to wait any longer.

Dusti Befort tossed a complete-game five hitter while also knocking in three runs as Garden City overcame a late three-run deficit to beat Hutchinson 8-6 and earn a trip to the 6A softball state tournament.

“We knew we could do it,” Befort said emphatically after the game. “We heard what peolpe were saying and proved them all wrong.”

The senior, who worked in and out of trouble all game long, didn’t get much help defensively early on. In fact, her team spotted the Lady Salt Hawks an early 2-0 lead, thanks to two errors and two passed balls in the opening frame. But Garden City bounced back in the bottom half when Befort belted a one-out, two-run home run over the center-field fence that tied the game 2-2. 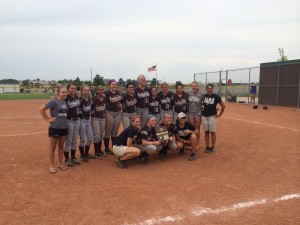 Hutch regained control in the top of the second when Emily Idler scored on Haley Saldana’s fielding error. Then Allie Pierce padded the lead in the third with an RBI fielder’s choice that scored Shayla Degarmo and Izzie Godina making it 5-2.

Garden City got back in the contest in the fourth on Jordan Terrone’s run-scoring single to center. But the Buffs couldn’t muster another run in the frame after Alyssa Long struck out and Kennedy Brunson grounded out-ending the threat.

Hutch added what appeared to be the all-important insurance run in the fifth on a passed ball that scored Godina from third. That set up the dramatic finish.

In the bottom of the fifth-Garden City pulled closer again, this time on the back of Saldana’s solo shot to left center. The blast sliced the Hutch lead to 6-4.

After Befort retired the Hawks in order in the sixth, her team went to work on Hutch starter Kacia Hilty. In one of the strangest innings of the season, Garden City plated four runs-the craziest part: only one ball left the infield-Shea Nordby’s lead-off single. From there-Terrones had a bunt single; Long placed down a perfect sacrifice bunt; Brunson stroked an infield RBI single and Jamie St. Clair reached on an error-allowing Terrones to come across with the tying run. Befort’s fielder’s choice RBI gave Garden City a one-run lead before an error by Godina allowed the go-ahead run to come home.

Hutch rallied in the seventh to put the tying run on base. But a base-running blunder by Hiley cost the Hawks a run.

With two outs, Emily Wessel hit a ball right at St. Clair at third. The senior’s throw to first was late and Wessel was safe. The odd thing was hat Hiley, who was standing on third base, never came home, which would have made it a one-run affair. The game ended moments later when Pierce grounded out to third.

“It’s hard to put this into words,” St. Clair said afterwards. “This is something we haven’t done in a really long time. We always had faith.”

That faith gave Garden City a bus ticket to Overland Park. Now they have to finish.

“This is an amazing accomplishment,” Head Coach Trina Moquett said. “This group has really come together.”