Garden City, Kan (westerkansasnews.com)-One could argue that the best thing that happened to the Garden City Elite this summer was an uninspiring 2-2 showing at the Tournament of Champions in Colorado. Even at 13-2 overall, that might have been the wake-up call Lyle Befort’s team needed.

“We hit the ball really well today,” Montoya said afterwards. “I didn’t have a great tournament in Colorado so I was determined to get hits here.”

Montoya didn’t record a single hit in Garden City’s four-game stint in Pueblo. That streak ended in the second inning when he stroked an RBI single to give the Elite a 2-0 lead. 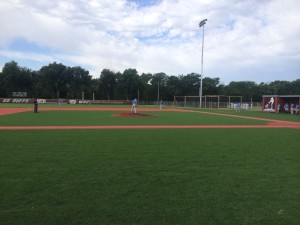 Jacob Rivas, who led off the third with a double, came around to score on a throwing error to make it 3-0. Rodriguez’s fielder’s choice RBI and Montoya’s second run-scoring hit gave Garden City a 5-0 cushion.

The Elite put the icing on the cake in the fourth-plating five more to induce the run rule.

“There’s still some things we need to clean up,” Montoya said. “But as long as we don’t make errors, we’ll be in good shape.”

Next up: Garden City vs. Goodland-Friday, June 27 9 p.m. at Lightner Field

Butler County Yankees 8, Widefield (16 and under)