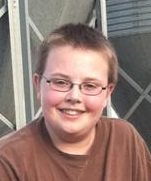 Riley Kellin Unruh, age 14, died Tuesday, July 8, 2014 at the Via Christi Hospital – St. Francis Campus in Wichita, Kansas.  He was born on May 29, 2000 in Greeley, Colorado the son of Michael Edwin & Kelly Loraine Bullard Unruh.  A resident of Garden City since February of 2009 he was a Middle School student.

He was a member of the Grace Baptist Church of Ulysses, Kansas.

Graveside Services will be held at 1:30pm on Monday, July 14, 2014 at the Pierceville Cemetery in Pierceville, Kansas.

Memorials may be given to the Unruh Family Memorial Fund in care of Price & Sons Funeral Home of Garden City, Kansas.