Garden City, Kan (westerkansasnews.com)-Matt Miller’s biggest challenge on opening night wasn’t forgetting last season’s disappointing finish; that was done as soon as camp opened in early August. No, his biggest chest move was trying to settle his new team’s nerves. He did; although it took a full quarter to do so.

Freshman quarterback Danarious Graham threw for 229 yards and a score, Matt McDonald punched in two rushing touchdowns, and Garden City overcame a very sluggish start and a late deficit to beat Highland 29-26 Saturday night in front of a capacity crowd at Buster Stadium.

“This one was for our fans,” Miller said. “It wasn’t pretty, but we got it done.”

After McDonald’s second rushing touchdown put Garden City in front 23-17 with 4:14 to play in the third, disaster struck. Ismael Hernandez’s, low, line-drive extra point was blocked by Antonio Thomas and returned 98 yards by Tyree Horton for a two-pointer that cut the Buster lead to four.

Garden City (1-0, 1-0) failed to make it a seven-point advantage later in the half when Hernandez pushed a 39-yard field goal wide to the left. That eventually came back to haunt the Busters early in the fourth.

Facing a second-and-nine at their own 38, Graham dropped to throw. But as he rolled right, the freshman was blindsided by Rasheed Brady, who knocked the ball free; picked up the loose change and rumbled 30 yards for the go-ahead touchdown.

“I’m sore,” Graham said after the game when asked how he was feeling. “But I’ll be fine.”

Moments like that, derailed the Busters in the past. In fact, that very aspect defined the entire 2013 season-one massive mistake usually cost them the game. But Garden City, specifically Graham, never blinked. 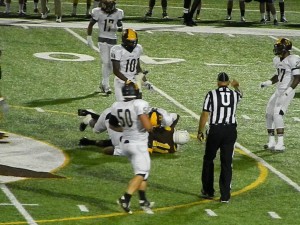 Down 26-23 with just over seven minutes to go, the Buster offense was once again facing a make-or-break play. It was third-and-19 from their own 39. The play: skinny post or the Miami-to-Miami connection.

“That’s money time,” Graham said after the game. “I had to make a play.”

And he did. Graham dropped back five steps and uncorked a  missile that floated over the outstretched arms of Bozeman and right onto the fingertips of Brandon Snell who rumbled to the Scotties five-yard line. On the play, Graham stood in and took a huge hit but still delivered a strike.

“I saw I had beaten the safety,” Snell said. “I was just hoping that Danarious could make the throw. He did. I should have scored.”

That may have been the case, but it became a moot point one play later, when Undre Williams, the red-shirt freshman who was one of the final cuts in fall camp a year ago, blasted in from five yards out to put Garden City back in front. Hernandez missed the extra point, and the Buster lead was 29-26.

“We made plays,” Miller said. “We made some bad plays, but we never quit.”

Then the defense, who definitely showed some signs in week one, caught a huge break in the final minutes. After Garden City was forced to punt deep in their own end, Highland set up shop at their own 47 with 2:17 remaining armed with two timeouts. 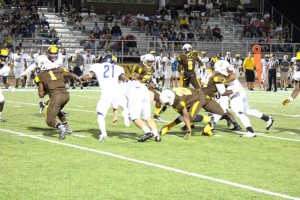 Back-to-back drops by Ryan McNellis and Troy Grant made it third-and-10. Journeyman quarterback Kyle Todd, who finished the night 23-of-46, for 183 yards and an interception, called his own number on the next play and squeezed out eight yards. But the inability to hold onto the football again cost the Scotties (0-1, 0-1) on fourth down. Todd fired what should-have-been a first-down strike to Deandre Mathis, but the ball caromed off the freshman’s fingertips and dropped to the ground. When it was all said and done, three drops in four plays gave the ball back to the Busters, who were able to run out the clock.

“I thought our defense was fantastic,” Miller said. “They made plays when they had to.”

Early on it was the offenses marching up and down the field. Highland scored the first points of the game when they drove 57 yards to the Buster one. But a bad snap on third down forced running back Tramaine Batten to fall on the ball back at the six. Josh Pasley, who was named a top 10 preseason kicker by the NJCAA, drilled a 23-yard field goal to give the Scotties a 3-0 lead.

After Garden City punter Lawyer Davis pinned the Scotties inside their own 30, the defense made their first big play of 2014. Sophomore safety Trevin Wiens picked off a wobbly Todd pass and returned it to the Highland two yard line. But three plays netted minus two yards and the Busters had to settle for a 21-yard field goal that tied the game 3-3.

The Scotties grabbed the lead back in the final two minutes of the opening frame on a fortuitous bounce that shaped the entire first half. On fourth-and-one from the Garden City 30, first-year Highland Head Coach Aaron Arnold rolled the dice and went for it. It paid off. The snap, which bounced away from Todd, was scooped up by running back Isaiah Ming, who found a crease and raced 30 yards to the end zone. A stunned home crowd watched Pasley kick the extra point-giving the visitor’s a 10-3 advantage.

Trying to respond, the Busters blew a scoring opportunity when Graham tried to force a pass to Monterio Burchfield in the end zone and was intercepted by Chris Bivins. That play finalized an opening quarter where the Busters totaled -24 yards.

“We didn’t start off well at all,” Miller said. “Maybe it was nerves or whatever, but we just didn’t play like we’re capable of in the first quarter.”

Though the second quarter was much better from a numbers standpoint, Garden City wasted another scoring chance inside the Highland five when Miller decided to go for it on fourth-and-goal, only to watch Graham get stonewalled by Hugh Smith for a four-yard loss.

The Buster offense finally got on track late in the second when Graham drove his team to the Highland 16. An eight-yard loss on a screen pass to Davis followed by an incompletion had Garden City facing a fourth-and-nine from the Scotties 25. Miller deferred the field goal and kept the offense on the field. The gamble worked as his freshman signal caller scampered up the right sideline for 21 yards and a first down. The Busters tied the game two plays later when McDonald took an option pitch around right end and strolled into the end zone. 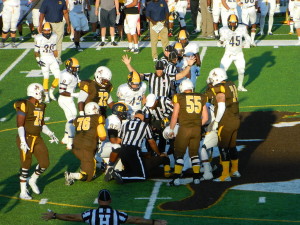 The score remained deadlocked until early in the third quarter when Graham engineered a nine-play, 75-yard drive that consumed over three minutes and resulted in the rookie quarterback’s first collegiate touchdown pass: a 32-yard strike to a wide-open Burchfield up the right-side numbers. The veteran receiver blazed by sophomore safety DeAndre Bozeman. Hernandez added the PAT and Garden City had a touchdown lead 17-10.

Highland responded quickly on their next drive, using a decisive, no-huddle attack that would have made Warren Moon and the run-and-shoot 1993 Houston Oilers jealous. The Scotties covered 64 yards in 11 plays in just over two minutes. They capped it off with Cedrix Reed’s six-yard score that evened the contest at 17.

Graham finished his first college game 18-of-35, one touchdown and two interceptions. He also ran it 25 times for 38 yards. Brandon Snell caught nine balls for 135 yards including the reception that setup the go-ahead score in the fourth quarter. Burchfield had four catches for 56 yards and a touchdown.

Notes: Garden City now leads the all-time series with Highland 26-5…After totaling -24 yards of total offense in the first quarter, Garden City exploded for 335 over the final three periods…Highland has now lost seven of their last eight season openers dating back to 2006…The two teams combined to fumble seven times (Garden City lost two; Highland none)…Highland was just 3-of-16 on 3rd down (Garden City was 9-of-19)…After averaging nearly 100 penalty yards a game last year, Garden City committed just six for 61 in the opener; Highland on the other hand was flagged 13 times for 120 yards

Listen to the entire game in our archived broadcast section: Click Here