Garden City, KS (westernkansasnews.com) A 49 year old man has been treated and released from St. Catherine’s Hospital, but now faces DUI, reckless driving and speeding charges after an injury accident Sunday morning at 7.

Police officers were called out to the Garden City Shopping Center on East Kansas Avenue.  When officers arrived they found a Chevy Impala that had been damaged, but could not locate the driver.  Police say 49 year old Kevin Brownlee left the scene.  His car is believed to have hit both the Hastings store and MooYah sign then plowed into a utility pole.

Damage to Hastings pictured below 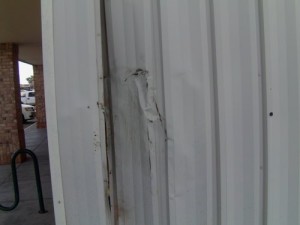