Garden City, Kan (westernkansasnews.com)-The old saying is so true: when things are going bad, there’s no stopping them.

For Garden City, things went from bad to worse on Saturday night. Ft. Scott running back Devin Taylor erased an eight-point fourth-quarter deficit with two touchdowns in the final 12 minutes, and the Greyhounds stole a victory at Buster Stadium 32-28.

“Turnovers killed us,” Garden City Head Coach Matt Miller said. “We couldn’t establish much of a running game. And the protection was difficult at times.”

To the tune of four sacks; in fact Danarious Graham was running for his life again for most of the night. Still, even with all of that, Garden City (3-4, 2-3) held a 28-20 lead following a spectacular one-handed touchdown grab by Jade Cathey early in the fourth quarter.

But mistakes would eventually be their downfall, and none were bigger than a fourth-down gaff with Ft. Scott lining up to punt from their own 26 with 12 minutes to play. Kicker Matt Vincent raced up to the line of scrimmage and drew the Busters offsides, giving the Greyhounds (3-5, 2-4) a fresh set of downs. On the very next play, Taylor found an opening and raced 59-yards to the end zone for a touchdown. With a chance to tie, Ft. Scott missed out on the two-point conversion when Taylor was stuffed at the one-yard line, preserving Garden City’s 28-26 lead; at least for the moment. 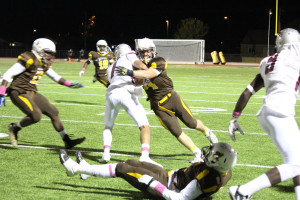 The clock nearly struck midnight on the Busters’ next drive when, on third-and-7 from their own 23, Graham’s pass into triple coverage was batted around and intercepted by James Gray, who returned it to the Garden City 20; an unsportsmanlike-conduct penalty moved the ball to the 10. After three plays gained only one yard, Ft. Scott Coach Curtis Horton sent his field goal unit out for a go-ahead chip shot. But Blayke Lindenman pushed the kick wide right and Garden City appeared to have dodged a major bullet.

In blackjack, the house always win. And although Buster Stadium isn’t the Las Vegas Hilton, Miller’s team  hit on 12 enough times that it finally came back to haunt them. After a quick three-and-out and a 20-yard Lawyer Davis punt, Ft. Scott was setup with tremendous field position at the Garden City 38. On first down, Taylor broke three tackles at the line of scrimmage and rumbled down to the four-yard line. Two plays later, the freshman, who became the eighth Greyhounds’ back in the last nine years to reach 1,000 yards rushing, plunged into the end zone to give his team a 32-28 lead. A subsequent fail on the two-point conversion left it a four-point game.

Trailing with under s seven minutes to play, Garden City got a spark when Cooksey returned the ensuing kickoff to the Ft. Scott 48. With two timeouts, the Busters went to work. Graham hit Snell for seven yards on a third-and-4 down to the Greyhounds’ 35. Then Graham converted another third down-finding Farres James on a screen pass for 11-yards down to the nine. On first down from there, Dondre Cooksey was stonewalled for no gain. On second down, Graham fired a slant behind Burchfield at the goal line. On third down, the freshman took a low snap and plunged forward for a yard gain. That setup fourth-and-goal. With postseason aspirations still there for the taking, Graham took the shotgun snap, but his pass was batted up in the air at the line of scrimmage by Donald Blackmon-giving Ft. Scott the ball back at the eight.

A ensuing first-down run by Taylor ended any chance of the Busters getting the ball back.

“We need to come up with a better game plan and execute it better,” Miller said. “That’s our problem.”

That and turnovers, two of those coming on special teams. One of those came when the Busters’ blocked a Vincent punt midway through the third quarter. The ball popped into the air, but Cathey couldn’t secure it and Ft. Scott jumped on top of it. The other one happened before half time when Snell misplayed a punt inside his own 40-yard line and Dale Henderson recovered for the Greyhounds.

Sprinkle in those; plus three giveaways by Graham and it’s a recipe for disaster.

Garden City dug themselves a hole early-falling behind 10-0 on a 29-yard field goal by Lindenman and a crazy bounce that resulted in a touchdown. Late in the first-Ft. Scott had a first-and-goal at the eight when the normally sure-handed Taylor fumbled the football. As luck would have it, quarterback Marc Walbridge was there; scooped up the loose change and ran it the remaining five yards for the score.

The Busters responded with the next 14 points: graham’s two-yard rushing touchdown, which was setup by his own 38-yard scamper up the numbers, and Snell’s spectacular 55-yard touchdown reception.

But Garden City gave the lead back when Jonathan Harris, whose high-school playing days included a stint at powerhouse Miami Central, stripped Graham and the Greyhounds recovered at the Busters’ eight. Three plays later, backup quarterback Braxton Ross was in the end zone on a one-yard sneak-giving Ft. Scott a 17-14 edge.

Garden City responded with six-play, 75-yard drive directed by backup Tyler Lasalle. The freshman from Holcomb finished it off with an eight-yard touchdown run giving the Busters a 21-17 halftime lead. 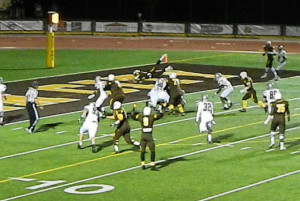 Lindenman added a second field goal early in the third to make it 21-20 before Cathy’s acrobatic touchdown grab later in the period.

Graham finished the night 16-of-27, for 268 yards, two touchdowns, two interceptions and a lost fumble. He also ran for 37 yards and a score. Snell caught five passes for 99 yards and a touchdown.

On the other side, Taylor reached 200 yards rushing for the fourth time this season-tallying 243 on 34 carries-scoring twice. Walbridge was just 6-of-17 for 42 yards. Shawn Thomas caught a game-high six balls for 35 yards.

Notes: This was Ft. Scott’s first win in Garden City since 2009…The Busters totaled five turnovers; it’s the ninth straight game they’ve turned it over two times or more…Garden City has allowed 20 sacks in their last 4 games (4 vs. Ft. Scott)…Five of the last eight meetings between these two teams has been decided by a touchdown or less…This is the first three-game losing streak of the Matt Miller era (not counting the forfeit games from last year)…The Busters played without running back Undre Williams (gone for the season with a torn ACL); left tackle Jarek Smalley and safety Trevin Wiens (concussion)…Ft. Scott ended a streak of nine straight games with at least one turnover (0 vs. Garden City)…Greyhounds ended a streak of six straight conference road losses

Listen to the entire game in our archives section