Garden City, KS (westernkansasnews.com)-If Brady Trenkle’s team plans on competing come March, his team needs to learn how to finish. That was the main message after Friday night’s heartbreaking loss to Northeastern. But if Saturday’s contest proved anything, it’s that the Busters are still a work in progress.

Marcus Johnson scored a game-high 19 points and Coris Williams added 16 and nine rebounds as Hill College remained unbeaten with an 81-75 victory over Garden City at the Perryman Athletic Complex.

“It’s the same thing as last night,” Trenkle said afterwards. “We’ve got guys not playing hard. We’ve got guys that are, but it just wasn’t enough.”

After a timeout, Evan Moorman canned a contested three from the left wing, and Kristian Keys, who was fouled away from the ball on the shot, hit two free throws to cap a five-point possession and give Hill a 67-62 advantage.

“We couldn’t get calls tonight,” Trenkle said. “But give Hill credit, they earned them. We have to start earning those calls.” 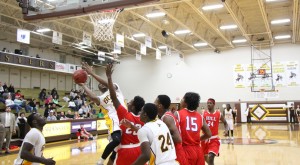 Garden City managed to tie the game moments later, only to watch Williams grab Moorman’s missed 3-pointer and stick it back in. The rebels had 13 second-chance opportunities on the night, and that proved to be the difference down the stretch.

Trailing by two with less than a minute to play, Trenkle’s team needed a stop. But they couldn’t grab a defensive rebound. And after two misses by Tyrell Green left the door open, Butler slammed it shut with a triple from the right wing.

“We have to get rebounds,” Trenkle said. “We were terrible on the glass.”

Fowlkes kept the Busters afloat with a deep 3 on Garden City’s next possession. And following Johnson’s turnover, the Busters actually had a chance to tie or win the game, down 77-75 with 20 seconds left. But Richie Spiller’s teardrop in the lane was too strong, and Tidell Pierre lost the grip on the offensive rebound. Butler and Johnson hit all four of their free throws in the final seconds to put the game on the ice.

Spiller finished with 11 points but was just 3-of-11 from the field. Davon Anderson tallied 11 points and seven rebounds, while Tyrell Springer notched just seven points on 3-of-10 shooting.

Green was one of four Rebels in double figures with 14 points and four boards. Keys chipped in 11.

If anyone needed a do over after Friday night’s loss to New Mexico, it was Loysha Morris. Garden City’s sophomore guard, who is garnering plenty of attention from Division-I schools all over the country, was, by her own admission, terrible against the Thunderbirds.

24 hours later, she morphed back into one of the best players in the conference-scoring 19 points on 6-of-13 shooting in Garden City’s 64-47 win over Trinidad State Saturday night at the Perryman Athletic Complex.

“She (Loysha) played one of the worst games imaginable on Friday,” Head Coach Nick Salazar said. “I don’t think there is any other way to describe it.”

She missed her first 12 shots against New Mexico, and really wasn’t a factor until the final 10 minutes. The second-year player didn’t wait that long on Saturday.

Morris set the tempo right from the jump; scoring 15 first-half points. And after the Lady Trojans (3-10) made things interesting early, the sophomore, coupled with Tori Spann’s energetic boost, pushed the Busters out to a 14-point half time lead. It was all Garden City from there. 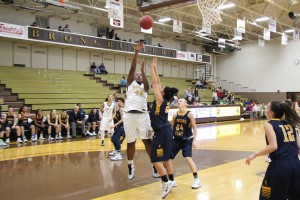 Kori Eurich, who came in ranked No. 10 in the nation in points scored, finished with 17 points on 6-of-19 shooting for the Lady Trojans. Claire Ioannidis totaled 14.