Garden City, Kan (westernkansasnews.com)-Buster coach Brady Trenkle said he wouldn’t be surprised if Tyrell Springer was an All-American by year’s end. And though his offensive game hasn’t caught up to his defensive prowess, that storybook ending might not be too far fetched.

The sophomore transfer recorded six steals to go along with 13 points, while Davon Anderson netted 21 points and connected on 11-of-14 free throws, as Garden City held off scrappy Western Nebraska 78-72 Thursday night at the Perryman Athletic Complex.

“This is a big; it was our home opener,” Trenkle said. “I mean, that’s a very good team we just beat.”

Good indeed, and for most of the night, Trenkle’s bunch struggled to climb over the hump. But they had their moments early. Springer picked Diante Mitchell’s pocket and glided in for an easy two-handed flush. That was followed up by Tidell Piere’s straight-on three that capped a 7-0 run and gave Garden City an early 7-3 advantage.

But the Cougars (1-1) responded with an 11 straight points to take their largest lead of the half.

After pulling to within three at the break, the Busters (3-0) regained the advantage early in the second half on a tap back by Anderson and Myrek Fowlkes’ and-one. Fowlkes was one of five Busters in double figures-finishing with 11 points and five rebounds.

But in a game that saw six lead changes-nothing felt like a sure thing. Especially when the Cougars built a 60-55 cushion with 8:27 to go. That’s where Garden City’s turned to an unlikely offensive option.

Jonathan Bell, who was one of two returning starters for Trenkle, bailed out Garden City with an acrobatic jumper as the shot clock was winding down to pull the Busters within three. On their next possession, Bell drained a triple from the corner to tie it, before pushing Garden City ahead with two free throws moments later.

“He (Bell) changed the game,” Trenkle said afterwards. “That 7-0 won us the ball game tonight.”

It gave Garden City a lead they never lost. Bell totaled 13 points on 5-of-8 shooting. Pierre notched a double-double with 11 points and 12 rebounds.

Preston Christensen scored a career-high 32 points and drained 6-of-9 from behind the arc to lead Western Nebraska. Mitchell scored 14; Damion Rashford added 11. 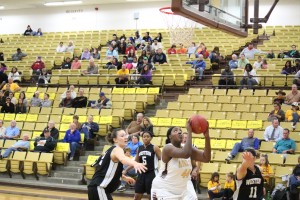 One thing was for certain entering Thursday’s showdown between Western Oklahoma State and Garden City: on paper, this game appeared to be a runaway. But the Lady Pioneers defied traditional logic and made things very interesting.

Despite a valiant effort to keep it close, the Busters had too much scoring. Tionnia McKee splashed home a game-high 15 points, and Taleah Williams recorded her second double-double of the season-scoring 14 and pulling down 14 rebounds as Garden City pulled away late for a 77-62 victory Thursday night at the Perryman Athletic Complex.

Those poor decisions led to a season-high 30 turnovers. And there were times in the first half, that Garden City (1-2) looked lost offensively. Case-in-point: Loysha Morris had her worst game of the season-eventually fouling out with a season-low five points on 2-of-12 shooting.

But there were plenty of highlights for Garden City, especially McKee, who connected on 5-of-9 from the field. At times, the freshman looked brilliant, showing the defensive tenacity that was lacking in the first two games against Murray State and Hill College.

“We will continue to say it: she (McKee) is the player we feel like we stole,” Salazar said. “We expect her to be very good.”

Western Oklahoma State (2-2) found themselves down 11 early in the second half. But Jerry Kassin’s team forced a couple of quick turnovers, and Raegan Mulherin canned a three from the left wing-pulling the Lady Pioneers to within six 43-37. That’s as close as they got. Garden City closed the game on a 34-25 run.

Tori Spann scored 15 points for the Busters off the bench, while Tashawyna Edwards finished with 11. Allison Frey led the Pioneers with 8 points and five boards, but more importantly, Western Oklahoma State lost their leading scorer Katelyn Schumaker to an apparent knee injury midway through the first half.