Jeff Sims, who is currently the Director of Player Personnel under Kevin Wilson at Indiana University, was named the 21st Head Coach in Broncbuster history.

“I’m really excited to be here in Garden City,” Sims said during his introductory press conference Thursday afternoon. “I’d like to thank Dr. Swender, Mr. Ruda, Mr. Lamb and Dan Delgado. You guys have made me want to be a part of Garden City Community College.”

“Our decision to bring Jeff in is a direct result of his body of work,” Athletic Director Ryan Ruda said. “An institution is only successful when it brings good people to the table. We wanted someone with character and integrity; Jeff Sims is that guy.”

Sims, whose coaching career spans nearly three decades, has a vast understanding of the Jayhawk Conference. After all, he guided Fort Scott to within 60 minutes of a national championship in 2009. The only thing that stopped him: former Blinn and current Carolina Panthers quarterback Cam Newton. 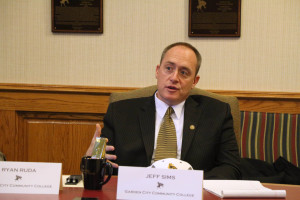 “Cam is one of the best college football players of all time,” Sims said. “But he wasn’t alone in beating us. They had a pretty good punt returner that put them in that position.”

During his time at Ft. Scott, the Greyhounds made three consecutive bowl-game appearances and were ranked No. 1 in the nation in 2009. He complied a 32-12 record in three seasons, while coaching the likes of All-Pro, NFL players Jason Pierre-Paul and Lavonte David.

Before arriving at Ft. Scott, Sims spent three years as an offensive play caller: two at Minnesota State-Mankato and one season at Southern Arkansas. He also served as assistant athletics director and head football coach at Mesabi Range Community College from 2002-2004. In 2003, he guided the Norsemen to a 10-1 record and a No. 14 ranking.

This past year, Sims, 42, returned to Indiana after a one-year stint as recruiting coordinator at Florida Atlantic under former coach Carl Pelini. He arrived in the sunshine state after serving in the same capacity at Indiana in 2011. 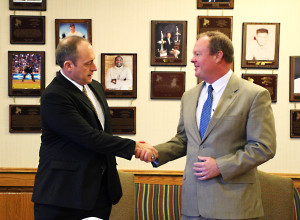 As for turning the Garden-City program around:

“We won’t luck into winning in this league,” Sims said. “We need to own Western Kansas and then get the first-round draft picks in here. That’s my goal.”

As for the future of the existing assistant coaches:

“I’ve met with each member of the staff,” Sims said. “And I’ve extended an invite for each of them to stay. They don’t have titles or what they’ll be doing yet, but they’re all more than welcome to stay.”