Garden City, KS (westernkansasnews.com)-It’s early July, and the wrestling season is more than five months away. But the work never stops. You get that feeling every time you walk into the wrestling room at Garden City High School.

“We never look back,” Head Coach Carlos Prieto said. “If you get complacent, you won’t get where you want to go.”

Obviously that philosophy rings true with his players after back-to-back 6A state  titles. But on the night of the fifth annual Brown and White Duel, last year’s state championship run is already a distant memory.

“We’ve got guys that have bought into this program,” Prieto said. “They know the work that needs to be done. We can never get caught looking back because there are some hungry teams out there.”

One of those is Olathe North, who’s actually ranked ahead of Garden City heading into this season.

“They’ve got some guys that moved in,” Prieto said. “They’re pretty talented.” 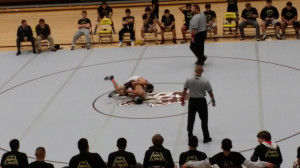 On the mats Tuesday night, there were some notable performances. Freshman Kaj Perez, knocked off fellow freshman Ruben Huerta in the first match at 106 pounds.