Liberal, KS (westernkansasnews.com)-During their film session on Monday, Jacy Holloway and his coaching staff were thoroughly impressed with Liberal’s resurrection.

“They’ve made a lot of strides from last year to this year,” he said. “So we knew how important it was to get off to a good start.”

Well, even the fifth-year coach was astonished after the first six minutes of the game.

Caleb Tramp scored 19 of his game-high 21 points in the first half, and the Buffaloes raced out to a 14-0 lead en route to a 57-31 victory at the Big House Tuesday night.

“I never expected to jump all over them like that,” Holloway said. “That was definitely a surprise.”

After watching his team turn the ball over five times in the first four minutes, Redskins coach Scott Hinkel replaced all five starters to send a message. Unfortunately it didn’t work.

Mershek Wiltshire finally got the Redskins on the board with a floater in the lane that ended a six-minute scoring drought. But it was too little too late; the damage was already done.

The Buffaloes (6-4, 3-0) dominated the rest of the way, shooting a torrid 51 percent from the floor. Liberal never got closer than 10 points.

Garden City’s largest lead was 26 three times in the second half.

Liberal, KS (westernkansasnews.com)-For two and a half quarters Tuesday night, Garden City had a hard time figuring things out. The final 10 minutes however, was a totally different story.

Abbie Dart and Alexis Elliott each scored nine points, and the Buffaloes roared back from an eight-point second-half deficit to beat Liberal 47-41 at the Big House.

“We’re still trying to figure out why we get off to such slow starts,” assistant coach Katie Upton said after the game. “But I’m proud of how the girls responded in the second half.” 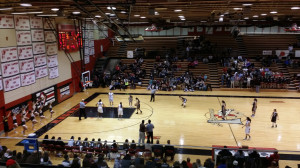 Nothing looked smooth early on after the Redskins used an 8-2 stretch to take an 8-6 edge. But the Buffaloes countered and actually took the lead going into the break.

“We had some rough stretches tonight,” Upton said. “We couldn’t keep them off the glass.”

He reinserted (Alexis) Elliott into the game, and the move paid dividends. Her presence in the post stopped the rebounding leak and fueled a 14-4 run to put Garden City (5-5, 1-2) up 32-30 at the end of the third quarter.

“She (Elliott) was huge for us tonight,” Upton said. “Her numbers don’t jump off the page, but she solidified the middle.”

The Buffaloes built the lead up to as many as eight in the final minute before holding on for a six-point victory.

“We’ve got to do a better job rebounding the ball,” Upton said. “Second chances kept them in the game.”

Megan Besecker knocked down three triples and finished with 11 points to lead the Redskins.

There were four ties and four lead changes.