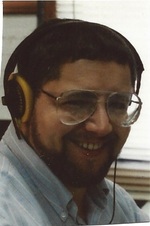 John grew up in Quincy, Ill. And graduated from Quincy High School in 1967. He then attended Central College in Pella, Iowa. Later he attended and graduated from the Kansas City School of Broadcasting in Kansas City, Missouri. A news and sports broadcaster, John began his career in North Dakota. He lived and worked as a broadcaster in North Dakota, Iowa, Kansas, Missouri, Texas, Nebraska, and Colorado. He moved to Ulysses, Ks. in 1990 where he worked for KULY/KFXS. He then worked as a news director in Liberal, Kansas, and most recently was the morning host for High Plains Public Radio in Garden City. He has lived in Garden City since 1996. John was a member of the Kansas Association of Broadcasters where he received numerous awards for broadcasting. He enjoyed camping, WWII history, gardening, and was an avid Beetles fan.

On August 31, 1985 he married Linda Speedone in Horton, Kansas. She survives. Other survivors include a son Christopher J. O’Sullivan of Garden City; nine nieces; and two nephews. John is preceded in death by his parents.

A private family service will take place at a later date. There will be no calling hours. The family requests memorials given to Friends of Lee Richardson Zoo in care of Garnand Funeral Home of Garden City.