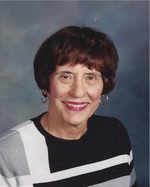 She was born January 4, 1928, at Meade, KS and was the daughter of Elmer William Henkle and Esther Miller Henkle.

Joyce was a professor of sociology and marriage and family at Garden City Community College for 26 years. She was awarded the Outstanding Teacher Award. She became the first woman division director at the college and retired in 1993 as Social Science Division Director.

While at GCCC, she wore many hats. She was a cheerleader sponsor and even established on-site day care. One of her most memorable accomplishments was founding and directing Project:I Care. This program paired a child in the community who needed a friend with a sociology student. They shared activities and experiences with one another on a weekly basis. This program was a result of her activities with Friends of the Court and her experiences with a beloved young boy named David Humpfreys. Mrs. Boone and her husband established a Project: I Care endowed scholarship fund at the GCCC. In 1979, the YMCA recognized her work with Project: I Care and presented her with the Brice Roderick Service to Youth Award. Additionally, The Ford Foundation recognized her work with Project:I Care.

She was a member of the Kansas State Teachers Association, Kansas Committee for the Humanities, director of the GCCC lecture series, and a trustee at Southwestern College.

Mrs. Boone was involved in her community of Garden City for over 65 years. She generously lent her support to most every organization in Garden City. She was a Cub Scout mother, 4-H mother, room mother, Friends of the Zoo, Finney County Historical Society, and Friends of the Library to name a few. She was actively involved with Rotary International and was Rotary Ann, Paul Harris Fellow, International Benefactor and performed duties as a District Governor’s wife 1990-1991.

Joyce was an active member of P.E.O. Chapter X Garden City. She held every office, celebrated her golden year and her daughter and four granddaughters were initiated into her chapter.

Joyce and Stewart are passionate about spreading the good news of Jesus Christ. They jointly taught 5th grade Sunday School for over 25 years and participated in Vacation Bible Schools at the First United Methodist Church. She was a member of the Builders Sunday School Class and the United Methodist Women. Her children and grandchildren were taught at an early age to love the Lord.

Joyce and Stewart loved to travel. Some of their travels were to London, Holland, Israel, Greece, Switzerland, Mexico, Caribbean, Panama Canal, Monte Carlo and Hawaii. They spent five weeks in Kenya and Tanzania to study early man where they spent time with the Leakey’s at the Olduvai Gorge. In 2001, the whole family went to retrace the Battle of the Bulge in Europe. When she could not travel, she would travel by reading books. She was an avid reader.

Joyce enjoyed golf and can even boast of a hole-in-one at the Garden City Country Club. Her other passion was bridge. She was in numerous clubs and became known as “Mrs. 3 No Trump”. She loved to cook and her grandchildren have fond memories of baking with her.

Her joy of living, her enthusiasm and energy, and her love of children are part of her legacy. Joyce was a great story teller and lived through interesting times.She chronicled her memoirs for her family in a book entitled I Wouldn’t Have Missed the Trip. She was beautiful, smart, and fun. She will be missed!

Mrs. Boone is survived by her husband of 66 years, two sons, Dr. Jeff Boone and wife Colette of Englewood, CO, Russ Boone and wife Denise of Henderson, NV and Brenda Boone Street and husband Rob of Liberty Township, OH, ten grandchildren: Brett, Tyler, Dena, Parker, Hunter, Ellen, Kiki, Amy, Donna and Julie and four great-grandchildren: Rowyn, Hudson, Halston, and Duke. A fifth great-grandchild is due at the time of this printing. She was preceded in death by her sister Madelyn Vogel and survived by her two brothers Jim Henkle of Livingston, NJ and Richard Henkle of Garden City, KS.
A memorial service to celebrate her life will take place at 11:00 a.m. on Saturday, January 17th at the First United Methodist Church in Garden City, KS with Rev. David Bell officiating. There will be no calling hours. Condolences may be given at garnandfuneralhomes.com. Memorial gifts can be given to the Joyce Boone Project: I Care Endowed Scholarship at the Garden City Community College in care of Garnand Funeral Home of Garden City.

Joyce continues to give to others by choosing to donate her body to the KU Medical Center. A private family burial ceremony will take place at a later date.