Garden City, KS (westernkansasnews.com)-All Buster coach Brady Trenkle was asking for was 40 minutes; give the second-year skipper a complete game. It came a little later than expected, but his team finally delivered.

“The kids played hard,” Trenkle said afterwards. “There were a couple of minutes where we had some lulls, but for the most part they played really well.”

Things were clicking, especially on defense, where the Busters held Dodge City (14-7, 4-3) to just 34 percent from the field; their worst shooting game of the season.

“It was a great game to watch,” Trenkle said. “Two teams going at it. You love these types of games. The crowd was into it.”

And they had plenty to cheer about in the second half, watching their team shoot nearly 60 percent from the floor. But minutes into the final frame, the Busters found themselves in all-too-familiar territory: trailing after Raheem Watts buried two free throws to give the Conquistadors a 38-37 advantage.  The charity shots completed a turnaround that saw Dodge City erase a seven-point, first-half deficit. De ja vu all over again? 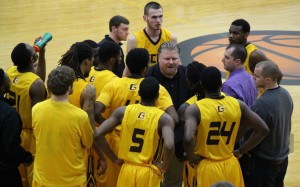 “We certainly were confident,” Trenkle said. “They made a run, but we countered it every time.”

Springer, who finished with 15 points, made his presence felt on the defensive end. Late in the first half, Anderson missed a wild runner in the pant. EJ Eaves grabbed the loose ball and raced the other way. It appeared the sophomore from Gray Military Academy in Columbia, SC would have an uncontested layup; that is until Springer met him at the summit, swatting the shot into the first row. The rejection drew the crowd to their feet. More importantly Trenkle cracked what appeared to be a smile on the bench.

“If we defend, we’re pretty good,” Trenkle said. “I thought our defense played well in spurts in this game.”

And they had their hands full coming in, trying to contain seven-foot prodigy Payton Pervier. But Tidell Pierre, Anderson and Antorian Moore held their ground, holding the big man to just 10 points on 4-of-12 shooting.

Garden City, KS (westernkansasnews.com)-For the better part of four days, basketball took a back seat for the Buster women. When life flashes in front of your eyes, perspective sets in; it’s only natural. Wednesday’s accident on the way to Seward County opened several eyes.

“The accident, as crazy as it sounds, was a blessing in disguise,” Head Coach Nick Salazar said before Sunday’s game With Dodge City. “It’s given us time to heal. And we’re fortunate that everyone is okay.”

Sunday it was back to work, and Garden City, for the first time in the new calendar year, it appeared to have fun playing. Loysha Morris scored 15 of her game-high 23 points in the second half as Garden City held off Dodge City 65-59 Sunday afternoon at the Perryman Athletic Complex.

“I said if we shoot the ball well, we would win hands down,” Salazar said afterwards. “Well, we didn’t shoot well, and we still won.”

That’s because of their defense, holding Dodge City (10-11, 1-6) to their worst shooting game of the season 29 percent. 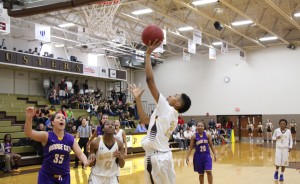 On the other end, Morris set the tempo, showing no ill effects from a knee injury that forced her to miss the game with Cloud County. Her aggression early on proved she was just fine.

And she had plenty of help from Bianca Cage, Tori Spann and Taleha Williams; the trio scored 11 points apiece. Williams also tied a season high with 15 rebounds and recorded her sixth double-double.

Azaria Nave netted 14 points for the Lady Conquistadors but missed 16 of her 21 shots. She was the only Dodge Player in double figures.