Khyree Wooten scored a game-high 20 points, and Bruce Watkins Jr. delivered the knockout blow with a driving layup with less than 10 seconds to play-giving Colby a dramatic 67-65 victory over the Busters at the Perryman Athletic Complex.

“This is the most frustrated I’ve ever been in all my years of coaching,” Trenkle said afterwards. “I’m at a loss right now. We’ve got guys who don’t know who they’re guarding.”

That confusion led to the easiest game-winning basket in recent memory. After Davon Anderson sank two free throws to tie the game at 65, the Busters scrambled to get back on defense. That fire drill left Anderson matched up against the quicker Watkins at the top of the key.

“Davon wasn’t supposed to be on him,” Trenkle said. “That was Jonathan’s (Bell’s) guy. He was off in the corner covering a non-threat.” 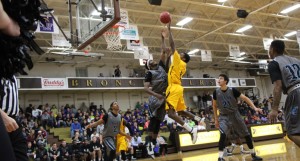 As Watkins crossed the timeline with six seconds to play, he hesitated briefly. It was just enough to get Anderson off balance as he blew right by him on the way to the rim. In Anderson’s defense, where was the help?

“We practice that all the time,” Trenkle explained. “We’ve got sophomores playing like freshman. You’ll notice those veteran guys didn’t play as much tonight.”

Even with that, the Busters still had a chance. But Myreek Fowlkes’ 3-pointer from the right wing clanked off the front rim, giving Colby their first win over Garden City in two years.

“He (Fowlkes) had a great look,” Trenkle said. “They couldn’t have executed it any better.”

“I apologize to all of our fans; that was the worst half of basketball in history,” Trenkle said.

And yet his team was only down 30-28 at the breaks thanks to a 13-3 run to close the first half. Garden City (11-7, 0-4) even grabbed a 58-57 lead late in the second half before Wooten knocked down two free throws to give the Trojans a one-point edge with three minutes remaining. Colby never trailed again; although Garden City made things interesting in the final 60 seconds.

With the shot clock winding down and the Busters down two, all they needed was a stop to keep it a one-possession game. And the defense was good, but Watkins buried a step-back triple over Richie Spiller to give Colby a 63-58 cushion with 1:26 to go. Wooten then split a pair of free throws to extend the lead to five.

“We have to find a combination that works in end-of-game situations,” Trenkle said. “The guys played their hearts out.”

Gage Loy countered with two free throws, and Tyrell Springer hit 1-of-2 from the line to make it a three-point game. Then with less than a minute to go, Loy swatted Joey Meyer’s inbounds pass up in the air and stole the ball. As he gathered himself he was fouled on the block. The freshman hit 1-of-2 at the line to cut the lead to two.

After Wooten made 1-of-2 from the stripe on the other end, the Busters were setup with an opportunity to tie. Anderson found a path to the basket and was fouled in the paint. The sophomore sank both free throws to tie it before Watkins late-game heroics.

“You can tell the guys who are playing their hearts out,” Trenkle said. “Davon is giving everything he’s got. He made a lot of mistakes, but I can live with those because he’s putting it all out there.”

Anderson finished the night with eight points and 12 rebounds but was just 2-of-11 from the floor. Fowlkes scored 11 points, and Antorian Moore added 10.

Brian Starr sparked the Trojans with 14 points, and seven-footer Ahmed Ismael chipped in 10.

Tip ins: Trenkle can look no further then free throw shooting; his team finishing an abysmal 26-of-43 from the line…It was the sixth time this season Garden City turned it over 20 times or more…The win by Colby snapped Garden City’s three-game winning streak winning streak in the series…The Busters are 0-4 in conference play for the first time in more than a decade…It’s the first four-game losing streak of the Brady Trenkle era and the first since the team lost nine straight under Rand Chappell in 2012-2013

Garden City, KS-For the last eight seasons, the Colby women have been the cellar dwellers of the Jayhawk West, finishing last four times during that time period. But those days apparently are long gone. If you don’t believe it, then Saturday’s win over Garden City should further prove that point.

DJ Cato poured in game-high 17 points, and DD Williams notched her 10th career double-double with 11 points and 15 rebounds as the Lady Trojans stunned the Busters 66-59 Saturday night at the Perryman Athletic Complex. 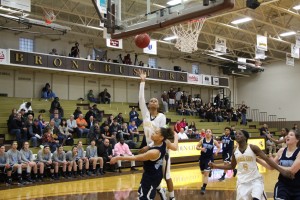 “I don’t care what the numbers say, I still think we’re the second best team in the West,” Salazar said. “We just have to start playing like it.”

Well they didn’t in this one, digging themselves into a 13-point hole with 2:36 to play before halftime. To put it into proper perspective: the Busters trailed despite Loysha Morris’s 18-point, first-half explosion.

But as they did on Wednesday night in their win at Barton County, the Busters rallied, scoring 17 unanswered points to grab a 40-36 edge with 13:57 to play in the game. Then it all came crashing down with Colby building the lead back up to as many as 10 points. They closed the game on a 30-19 run.

Morris finished the game with 30 points on 13-of-19 from the field. The rest of the team was a combined 11-of 47 (23 percent). Tionnia McKee was the only other Buster in double figures with 10 points. Salazar got nothing from his bench as they combined to score just three points on 1-of-19 shooting. 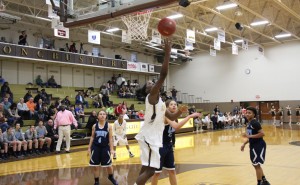