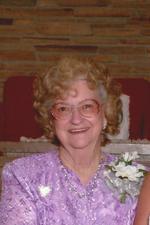 Thelma graduated with the Class of 1950 at Osawatomie High School. After high school she worked for the Osawatomie American Telephone Company. They lived in San Diego from 1953 to 1961 and then they moved to Beagle, Ks and then to Meade. In 1966 they moved to Kalvesta where in 1967 she started driving a school bus for Garden City USD 457 which she did for over 30 years. They moved to Garden City in 1976. Thelma enjoyed singing and being involved with the Fiddlers And Pickers music events. She was preceded in death by her Parents & Husband.