Garden City, KS (westernkansasnews.com)-Over the past half-decade, no one team has owned the Jayhawk West quite like Seward County. After all, they’ve hoisted the regular-season hardware each of the past seasons and have won 11 or more games five years in a row. But the team that’s been more known for its on-court play in the past is now feeling the effects of its off-the-court dealings. And Garden City took full advantage on Wednesday night.

Tyrell Springer tied a season-high with 22 points, recorded four steals, and Antorian Moore set a career mark with 17 points as the Busters beat the short-handed Saints 89-83 at the Perryman Athletic Complex.

“It’s nice to score 89 points,” Trenkle said. “But it would be nice to figure out the turnover problem. I don’t know what’s going on there.”

A season-worst 27 giveaways could have cost Garden City (17-12, 6-9) against a Saints’ squad that’s gone at times with just seven players. In fact, Seward County Head Coach Bryan Zollinger must have been licking his chops when he learned earlier in the week that Verdell Mays would play after he sat out the Dodge City game following the death of his sister-in-law in Kansas City last week. Not that Mays was the difference maker by any stretch but just the sheer fact that he was an eighth body, something the veteran head coach hasn’t been afforded in recent weeks.

After Springer recorded his second theft of the first half, punctuating it with a two-handed stuff to give the Busters a 13-12 lead, Seward County (15-12, 8-6) responded with five straight points to take an 18-13 edge. It was the start of an 18-8 run that saw the Saints build a 30-21 advantage with 6:44 left in the opening frame. That’s when Trenkle’s squad finally woke up.

Their counter: a 24-10 spurt that was finished off with Tykei Hallman’s right-handed stuff over Mitchell Packard right before the half. The play was set up by an offensive rebound following Gage Loy’s missed 3-pointer from the top of the key. The bucket gave Garden City a 45-40 lead at the break.

“This has been a lot of fun this year,” Trenkle said. “Even with all the ups and downs it’s been fun.”

However the second half provided the second-year skipper with a little more angst than he would have liked.

After Davon Anderson’s second-chance layup gave the Busters a 76-64 edge with 5:45 remaining, it appeared Trenkle would finally get that cruise-control victory he’s been searching for all season. But what would a Wednesday night at the DPAC be without a little bit of drama.

That drama came in the form of a tenacious full-court press, something the Saints deployed in the final five minutes. It worked, and when Secean Johnson completed a 3-point play with two minutes remaining, Seward County trailed 83-79. That’s as close as they would get. John Bell salted the game away at the line, and Garden City escaped yet again.

Johnson finished with 27 points for the Saints. He’s now scored 60 in two games against the Busters this season. Kevin Sims chipped in 19; Darius Polley 17, and Derek Dorn 13.

JT Bennett didn’t have his best shooting night but still knocked down two triples for Garden City to finish with 13 points. Bell added 11, and Anderson tallied 10.

“I keep preaching to my players that we need to win both of our last two games,” Trenkle said. “I want to get another game at home. A lot of things have to fall our way, but I want to play in front our fans one more time.” 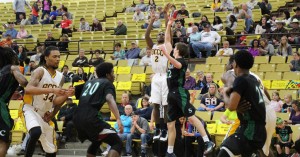 It’s not impossible for that scenario to play out, but more the more likely one is Garden City heading to the eastern side of the state for the opening round of the conference tournament. Still, as the Busters have proven over and over that the word impossible no longer exists in any piece of literature on school grounds.

Tip ins: Garden City halted a six-game losing streak to Seward County…Zollinger was denied his 200th career victory at Seward (he’s 199-68)…Garden City improved to 5-3 in conference home games this season…The Saints suited up just eight players (Nick Singleton was dismissed from the team along with Jamal Popler; Popler was suspended earlier in the season following the brawl at Barton County)

Garden City, KS (westernkansasnews.com)-When Toby Wynn served as an assistant coach under the legendary Jim Littell, he learned right away that the only thing acceptable in Liberal was winning. Littell’s teams did just that-winning 418 games in 14 seasons, including the program’s only national title in 2002. When he left, it was up to the new kid on the block to keep the tradition going. Not only has Wynn done that, he’s carved out his own legacy, both on the court and in recruiting.

Those recruiting efforts landed him Brooklyn Artis, a sharpshooting guard from Amarillo, TX who torched Garden City to the tune of 26 points on a the back of a career-high four 3-pointers as the Saints destroyed the Busters from the jump 80-61 Wednesday night at the Perryman Athletic Complex. 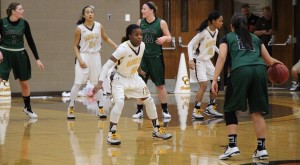 “If there is one team that can knock off a program like Seward it’s us,” Garden City Coach Nick Salazar said following his team’s win over Cloud County on Saturday. “It doesn’t mean that we will; we’re very average right now. But we have all the pieces.”

The pieces are in fact there, but the Lady Saints ran a basketball clinic on the Busters home floor, drilling eight treys, most of them uncontested. And they came off the result of the basically the same play.

Axelle Bernard made her living on Wednesday setting high ball screens at the top of the key. Instead of driving around them, Wynn instructed his players to use them as a shields to protect their 3-point shooters. The end result: a long-distance barrage that hasn’t been seen in the DPAC in quite some time. They connected on 9-of-22 triples building their lead to as many as 23 points. Only once did Garden City slice that to single digits in what was a one-sided affair from the start.

Daniela Galindo, the freshman from Shattuck, Okla. Scored 19 points on 7-of-11 shooting for the Lady Saints who improved to 25-2 overall and 13-1 in conference play. Bernard pulled down a season-best 16 rebounds.

Loysha Morris, who’s been plagued by knee problems all year, led Garden City with 13 points. Odyssey Trussel was the only other Buster in double figures with 10.

Tip ins: Seward County held Garden City to just 33 percent shooting; it’s the 25th time in 27 games that the Saints have held an opponent under 40 percent from the field…Seward County won their seventh straight game…Garden City is just 2-8 in their last 10 games and fell to 2-6 on their home floor in conference play