Garden City, KS (westernkansasnews.com)-Two days before their showdown with No. 4 Butler, Garden City Coach Brady Trenkle was eager to say the least.

“I’m excited for Saturday,” the second-year coach explained. “I like where this team is right now.”

Call it a premonition; call it divine intervention; call it whatever you’d like. Any way you slice it, Garden City is back on the national scene.

Davon Anderson recorded his ninth double-double of the season with 19 points and 16 rebounds, and the Busters beat the previously-unbeaten Grizzlies 83-72 Saturday night at the Perryman Athletic Complex.

“When kids buy in, coaching is extremely fun,” an extremely-hoarse Trenkle said afterwards. “I found out with this group that when they make a mistake, they want to go make up for it.”

And they did, in resounding fashion. After trailing early, the Busters flipped the script-going on a 29-12 run to take a 34-20 lead with 5:20 left in the half. The spurt included two vicious jams, one of those by Anderson on a beautiful setup from Tyrell Springer. Anderson returned the favor later in the game. 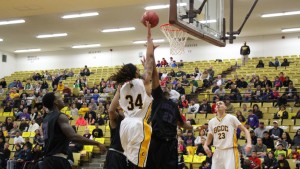 “We had our lulls offensively,” Trenkle said. “But for the most part, we fought through them. The guys are running the offense, and we’re getting what we want.”

Those scoring droughts could have easily cost Garden City (14-9, 3-6), especially after Damian Akao’s triple splashed home to give the Grizzlies a 63-62 advantage with less than eight minutes remaining. But it didn’t.

Kyle Steward and Lamar Wofford were the only double-figure scorers for the Grizzlies with 13 apiece.

Tip in: Butler’s 22-game winning streak was the longest in more than 70 years…It’s the Busters first victory over the Grizzlies since 2012…It was the second time in three games that the Busters grabbed 23 offensive rebounds (23 vs. Seward)…Garden City won the battle of the glass 42-29…There were 72 combined free throws in the game (82 were shot in the first meeting on January 3)…Garden City held Butler to their sixth lowest shooting game of the season (44 percent)…The Busters won back-to-back games for the first time since December 5-6…There were 10 lead changes and four ties…Butler’s largest lead was 8-5 with 15:55 in the first half; Garden City’s was 14 34-20 at the 5:20 mark of the opening period

Slipping through their hands; Butler downs Busters in final minute

Garden City, KS (westernkansasnews.com)-At times Saturday night, Garden City proved that they can play with the best the Jayhawk Conference has to offer. But as so often has been the case, late-game execution has been problematic for Nick Salzar’s team.

Amari Dennis dropped in a season-best 24 points on 7-of-12 shooting; Ashley Gibson scored a workmanlike 13, and Butler held on for dear life to beat the Busters 71-67 at the Perryman Athletic Complex. 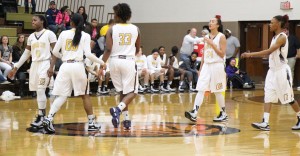 “It’s frustrating,” Salazar said after the game. “There’s really nothing more I can add to that.”

And that frustration boiled over during one timeout early in the first half, when his team fell down 19-7. Salazar slammed his clipboard to the ground, sending a message to his girls that their performance in the first 4:30 was unacceptable.

The Bobby-Knight ploy seemed to do the trick, and the Busters responded with a 17-5 run to take a 24-22 advantage with 7:35 left in the first half. They trailed by just three at the break.

Again in the second half, Butler (17-5, 7-2) built their lead to double digits; grabbing a 48-37 advantage early on. But as they did in the first half, Salazar’s girls never quit, pulling even when Odyssey Trussel buried a 25-foot 3-pointer near the sideline.

“We prove time and time again that we can play with anyone,” Salazar said. “We have to learn to finish. We had so many chances.” 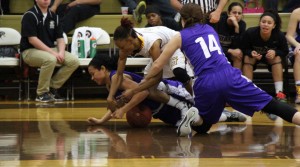 Those chances presented themselves in the final minute when Bianca Cage sliced a five-point deficit to two with a triple from the left wing. Moments later, Loysha Morris’s reverse layup made it a one-point contest. Then Nia Roberts missed 1-of-2 free throws, leaving the door cracked with 12 seconds, and Garden City (12-10, 3-5) trailing 69-67.

“A couple of calls didn’t go our way tonight,” Salazar explained. “But we have to be better.”

After a Butler timeout, Salazar put the ball in Morris’s hands. The sophomore put her head down and drove to the basket. But Dennis, who started in place of Knaydi Johnson who didn’t make the trip, slid underneath Morris and drew the charge. Gibson followed with two free throws, and just like that the game was over.

Butler shot 50 percent from the floor and drained 6-of-14 3-pointers. There were three ties and three lead changes. Garden City’s largest advantage was two; Butler’s was 12.