Garden City, KS (westernkansasnews.com)-It was only a matter of time before Kavita Akula found her stroke.

The freshman could not have picked a better night to do so.

“I can’t tell you that I’m surprised about what Kavita did tonight,” Salazar said. “Her shot looked good. What we’ve needed in every single ballgame the past two weeks was a third scorer, and we got that tonight.” 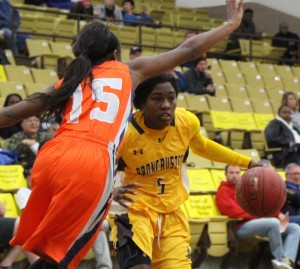 Akula’s shot was on display early, with her first triple ending a three-minute scoring drought. Her second gave the Broncbusters a 10-9 lead with 3:30 to play in the first quarter. Garden City (5-5) never looked back.

“I’m not going to overreact to this,” Salazar said afterwards. “I have a lot of respect for South Plains. I don’t believe they were ready to play tonight.”

The Lady Texans looked like a team lost in the cold, missing 10 of their first 15 shots from the field and watching their early 7-2 lead morph into an eight-point deficit heading into the second quarter.

Garden City’s offensive onslaught continued from there. Akula buried two more treys before halftime, and the Broncbusers connected on 10-of-12 from the field in the second quarter (83.3 percent) building a 15-point cushion going into the locker room.

“The thing about Kavita is that she was missing shots in her range,” Salazar explained. “We knew eventually that they would start falling.”

Coming into Friday night, the freshman from India had missed 24 of her last 28 3-point attempts. By game’s end, that stat was a distant memory.

Akula’s sixth 3-pointer of the night gave the Broncbusters a 55-23 advantage with 6:20 to play in the third quarter. That lead swelled to as many as 39 in the period before a 15-2 run by South Plains (7-3) made things interesting in the final period. 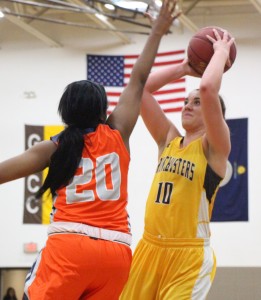 The Lady Texans cut the deficit to 19 in the final 10 minutes before the Broncbusters finally bowed up.

“I wasn’t happy with our defensive performance tonight at all,” Salazar said. “That was evident in the second half.”

Shala Dobbins scored 20 for Garden City, while Dominique Maxwell, who left the game in the second half with a knee injury ended with 13 points and three rebounds. DaRae Lewis chipped in 10 and seven boards.

Taylor Holley sparked the Texans off the bench by hitting six 3-pointers. She finished with 23 points. Elizabeth Cera scored 14 and Dabraisia Baty 10.

Tip ins: Akula’s seven 3-pointers were the most in a game by a Broncbuster since Angelique Green hit five in a blowout win over Midland back in 2012…Garden City was 10-of-15 from downtown (66.7 percent); it’s the most triples in a game since canning 14 of them on November 1, 2012 vs. Midland…the win snapped Garden City’s four-game losing streak…South Plains was averaging nearly 19 offensive rebounds per game coming in-Garden City held them to a season-low nine…The Broncbusters shot a season best 30-of-55 (55 percent) from the field and were 20-of-23 from the free throw line (87 percent)…It was only the second time this season that Garden City had four girls in double figures (they had four in an 87-31 victory over Southwest JV on Nov. 6

“We can’t just continue settling for jumpers,” Trenkle said. “We see what other teams are doing. They’re driving to the rim and getting the calls. We aren’t doing that.”

The Broncbusters got those calls on Friday night, and despite not taking advantage of them (17 missed free throws), Garden City found a way to beat Western Iowa Tech 77-68 at the Perryman Athletic Complex.

“Our guys played hard tonight,” Trenkle explained. “But at points we went brain dead. And we had a really good week of practice, so it’s really hard to explain.” 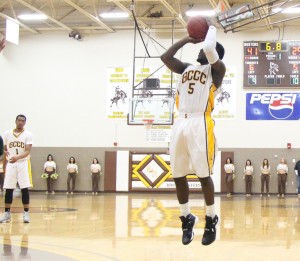 Garden City (7-3) came into Friday night’s game as the 12th best free-throw shooting team in the country. By the final buzzer, Trenkle’s team was 16-of-33 (48.5 percent)-their worst showing of the season.

“It’s just unacceptable and unexplainable,” Trenkle said referencing his team’s poor shooting from the stripe. “We were shooting at 75 percent, and to have this happen is terrible.”

In the second half, Josh Fleming setup Gage Loy for a two-hand jam that extended the margin to 61-40 with 11:16 to play in the game.

Meanwhile, Western Iowa Tech (2-8) found their groove, and Ryan Lawrence hook shot pulled the Comets to within 10 70-60 with 4:01 remaining.

They would get even closer in the final 1:30-twice cutting the deficit to seven points. B.J. Saunders 3-pointer made it 73-66 with 1:10 to go. Fleming answered with a layup to stretch the lead back to nine before Saunders two free throws trimmed it back to seven with 25 seconds. 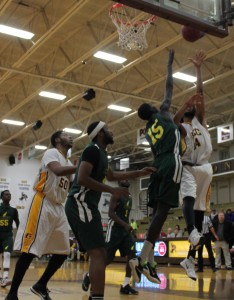 “I told our guys that this team (Western Iowa Tech) had plenty of talent, and that we weren’t going to come in here and blow them out,” Trenkle said. “So I don’t know what happened the final part of the game.”

“If we play like this in a conference game we will lose,” Trenkle said. “There’s no doubt about that. But my guys are fighting; they’re playing hard. We’ll get there.”

Fleming was the lone Broncbuster in double figures with 17 points on 6-of-10 shooting. Zach Beard and (Jabar) Ray each scored nine while Moore pulled down a game-high 10 rebounds. He had seven in the first five minutes of the game.

Saunders led the Comets with 20 points and five rebounds. Kyle Menard, who left the game late in the second half after rolling his ankle, hit three 3-poiners to finish with 15. Jalen Henriquez chipped in 10.

The Broncbusters scored the first seven points of the game before Saunders 2-pointer got Western Iowa Tech on the board with 17:14 to play in the first half.